The rocket was launched at about 10:05 EST from Van Horn, Texas, sending a capsule to heights above 100 kilometers, crossing the space frontier. 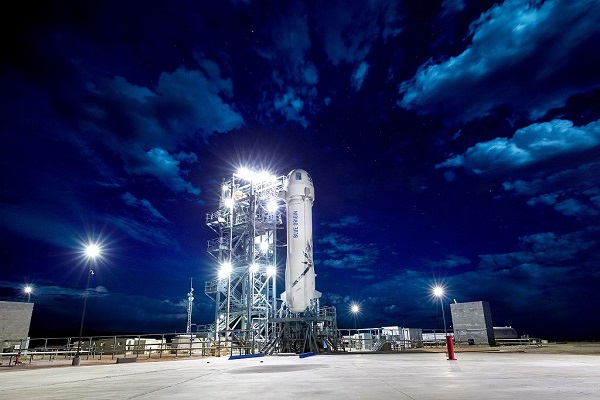 In this file handout photo taken on April 28, 2018 obtained courtesy of Blue Origin shows the New Shepard on the launch pad the morning of Mission 8, in an undiscolosed place. (File Photo: VCG)

New Shepard, naming after Alan Shepard, the first American to reach space, consists of a reusable rocket and a reusable capsule, according to Blue Origin.

The capsule and rocket separated several minutes after the launch. After separation, the booster flew itself back to a landing, about seven minutes later after the liftoff. The capsule reached an apogee of nearly 107 kilometers before floating back to Earth through parachutes.

Among those experiments are a demonstration that measures fuel levels in microgravity, a cooling solution for tightly-packed electronics onboard a spacecraft, and an examination on how dust particles react after surface contact during exploration missions to places such as the Moon, Mars and asteroids.

Testing in microgravity enables researchers to advance their technologies, readying them for future exploration and science missions, according to NASA.

This flight is focused on the technologies from government, academia and industry, said Ryan Dibley from NASA's Armstrong Flight Research Center.

The flight was previously scheduled last month, but scrubbed due to a ground infrastructure problem.

In December, Virgin Galactic, also a private spaceflight company, lifted off its SpaceShipTwo vehicle to reach the edge of space.

Both companies are planning to start sending paying people on their suborbital vehicles.