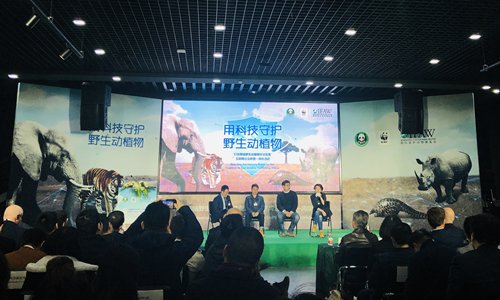 Chinese internet companies were invited to share their experiences on fighting wildlife trafficking online on Wednesday in Beijing. (Photo: GT)

China's internet giants helped law enforcement departments seize illegal wildlife and their products worth more than 40 million yuan ($5.9 million) in over a year by using big data and artificial intelligence technology. After the coalition to combat wildlife trafficking online was initiated by Baidu, Alibaba and Tencent in November 2017 in Beijing, they have become leading players in the wildlife trafficking crackdown in the country. Domestic internet companies had helped law enforcement departments seize  more than a ton of ivory, 90 kilograms of rhinoceros horns, more than 1,000 pangolins as well as other wildlife products, according to a report provided by the Wildlife Trade Monitoring Network (TRAFFIC), China Wildlife Conservation Association (CWCA) and World Wildlife Fund (WWF) to the Global Times on Wednesday.These companies had removed information on at least 1 million products, blocked more than 10 million ads and 350,000 illegal online accounts on wildlife trafficking in the past year, the report said.According to another report released by TRAFFIC on Wednesday, from 2017-18, the average number of new wildlife product advertisements every month on Chinese website platforms declined by 73 percent compared with 2012-16, and in 2018 the number on Chinese social media platforms declined by 25 percent and daily active users declined by 22 percent compared with 2017.However, increasing advertisements of illegal wildlife products are found in new emerging channels, such as short video streaming apps, traditional Chinese handicraft apps and second-hand trade apps. Some Chelonian species are thought to be traded through websites illegally, the report said. Ivory products made up the lion's share of online advertisements, followed by hawksbills, tigers, rhinos and whale products, according to the report.Gao Xin, a representative of Sina Weibo, which officially joined the coalition on Wednesday, said that the platform will use online celebrities and stars to spread the word to users, mostly young teenagers, about wildlife conservation.The Chinese coalition began to include foreign internet companies and has cooperated with TRAFFIC, CWCA and WWF since March 2018. It has 32 members as of Wednesday. Steven Broad, the executive director of TRAFFIC, told the Global Times that since suspects will always try to go around the law, the coalition keeps tracking new trends and sites online where wildlife is sold, as well as receives more members from arts collection and antique trading websites. The coalition's goal is to reduce wildlife trafficking online by 80 percent by 2020. However, staff from the coalition told the Global Times that there is a lack of information sharing among coalition members due to different corporate and national policies, which hindered members from working together.