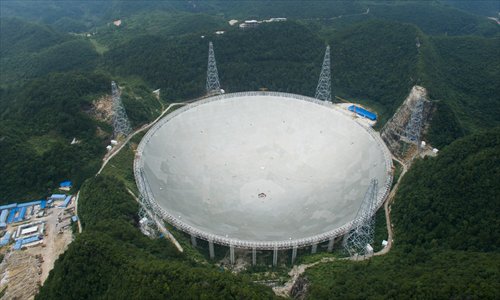 Data from a top Chinese travel agency shows that the country's space-themed travel has significantly grown, which would push forward national space development, experts said on Tuesday."The number of Chinese tourists searching for space-related travel products in China and abroad rose by 60 percent in the past year," an employee of the public affairs department of Ctrip, China's leading online travel agency, on the condition of anonymity, told the Global Times on Tuesday, citing a report the company released recently."Bookings for one of the most popular space-themed tourist sites through the company website, the Five-hundred-meter Aperture Spherical Radio Telescope in Southwest China's Guizhou Province quadrupled during the International Workers' Day holidays than the same period last year," the employee said.Other popular sites include China's first Mars simulation base in Northwest China's Qinghai Province and National Astronomical Observatories of the Chinese Academy of Sciences in Beijing.Sales of Beijing Planetarium tickets soared by 177 percent, and the number of tourists who are interested in visiting the Purple Mountain Observatory of the Chinese Academy of Sciences in Nanjing, East China's Jiangsu Province rose 121.93 percent year on year."The boom in the space-themed travel market is closely related to China's development in the sector, which would further push forward national space development and cultivate young people's interests in space exploration,", Zhu Jin, the curator of the Beijing Planetarium, who has 330,000 followers on Sina Weibo, told the Global Times on Tuesday.Chinese interest in space is also reflected on other aspects, including space-themed fiction works and movies. For example, China's domestic sci-fi movie blockbuster, The Wandering Earth, has grossed 4.6 billion yuan ($680 million) at the box office, which is a milestone in the country's development of science fiction films.