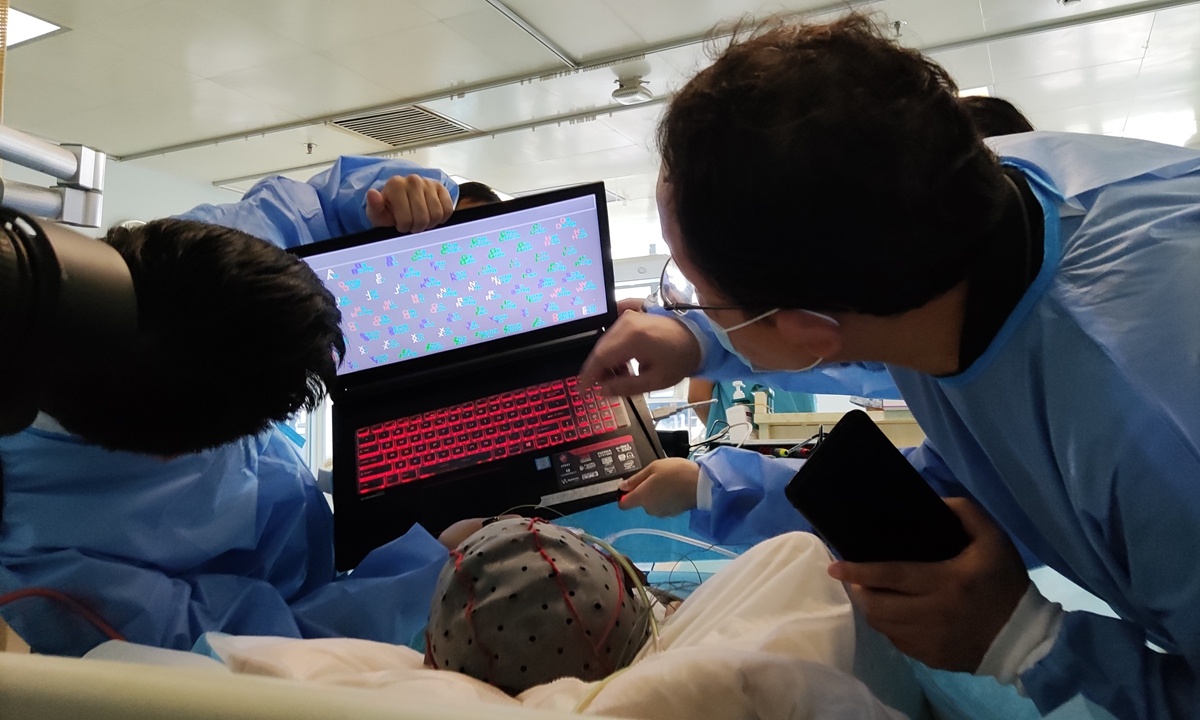 A paralyzed man who could only communicate by blinking his eyes, used a brain implant to say "Hello" through a computer, reportedly the first in the world, which touched medical staff at the Second Affiliated Hospital of Xi'an Jiaotong University, Northwest China's Shaanxi Province.

The patient, whose spinal cord was damaged in a fall, can only communicate with doctors by blinking. Using BCI technology, the patient can "speak" his thoughts by looking at a computer screen that is pulsating with characters or pinyin.

"This is the first case in medical history around the world, according to our research. To say 'Hello' is just the first successful step. We are planning to expand the language menu and help patients express themselves through BCI technology," Wang Gang, the deputy director of ICU department at the hospital, told the Global Times on Wednesday.

From 'Hello' to better communication

BCI uses electrodes to collect bioelectrical signals generated by brain activity, and then processes and analyzes the signals through a computer to decode signals such as movement and vision, to achieve human-computer interaction, according to the Xinhua News Agency.

BCI technology has been widely used in education, military, medicine and other fields.

BCI can be used to diagnose neurological diseases, predict and suppress the onset of epilepsy and in the recovery of stroke patients.

BCI is expected to help patients who lost speech functions to effectively communicate with medical staff and their families, allowing the patients to express their inner thoughts more accurately, Wang said.

The technology allows patients to select words by looking at an on-screen image.

A patient will focus on a word on the screen and the computer will be able determine which image is being stared at. The computer, for example, can determine the patient's choice between images for eat and drink.

A patient can also spell out what they want to say by looking at 26 letters on the screen. The patient who spoke "hello" spelled out the word, said Wang.

"Critical care medical staff usually ask patients to blink their eyes and ask them 'are you thirsty?' or 'do you need to go to the bathroom?' If the patient wants to express something, such as which relatives they want to see, staff won't know what they want," Wang said.

Wang was surprised his patient successfully said "Hello" on his first try, taking only 20 seconds. The research team was worried his brain waves would be abnormal because his fall had caused brain damage.

"Patients with large cerebral infarction or ischemia have abnormal brain waves, making attempts to use BCI technology less successful," said Wang, adding that "with the development of BCI tech, I wish more patients suffering from serious encephalopathy can also learn to 'speak'."

The medical team is considering replacing the computer screen with a tablet or phone to make the device more portable that can be installed next to the patient's bed.

In the future, Wang hopes the BCI technology will capture not only signals from the visual centers, but also the frontal, parietal and hippocampus regions of the brain, which are involved in complex brain signals related to thoughts, emotions and memories.

The hospital and Xi'an Jiaotong University's School of Mechanical Engineering studied how BCI technology can be used in critical care treatment for a year.

"I thought about how to make severely ill patients feel more relaxed, reduce their anxiety and depression, and how to make critical care more humanistic," Wang explained.