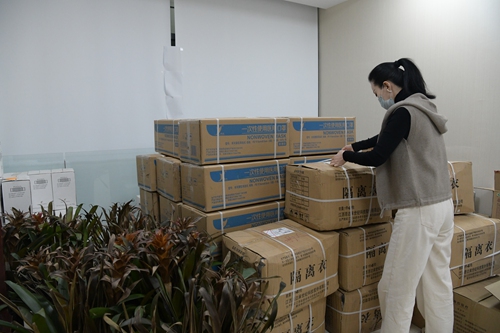 In addition to helping boost economies abroad, the BRI has been also serving as a cooperation platform for countries along the route to fight against the virus, and employ high-tech methods for public health.

As of April 3, China Communications Construction Co  Ltd (CCCC) had donated 2.8 million yuan ($395, 300) worth of medical materials to countries including Italy, Kenya and Malaysia. The company has also put forward its efforts in publicizing anti-virus knowledge.

The SHEC released a handbook on epidemic prevention in different languages including English, Serbian, Portuguese, Spanish, Thai, Vietnamese and Bengali, to help its local employees enhance understanding of the coronavirus.

CTCE provided timely support - including protective masks, disinfectant and hand sanitizer - to those countries where theirs BRI projects located, such as Mongolia. CRCC14 helped local employees and their families in Togo with basic knowledge about the virus.

Many enterprises have provided the recipient countries with high-tech support.

The CCCC invited medical experts from Wuhan to provide online guidance for employees overseas. Workers can also consult doctors at the China-Japan Friendship Hospital in Beijing via online platform.

All this is "driven by genuine concern and practical assistance" and "provides a win-win situation for China and the recipient countries," said Mboya.

"We have been accustomed to witnessing silliness of some Western politicians and media who smear China. But we have been taken aback when we see them stooping to ridiculous lows to make China's humanitarian assistance a propaganda tool during this hard time of humanity," he said, blasting the Western media, and pointing out that China's assistance through the BRI is purely out of humanitarian consideration, instead of the country's own benefits.

Lan Qingxin, an assistant dean of Institute of International Economy, University of International Business and Economics in Beijing, told the Global Times said that "The BRI is an important channel for building a community of common health for mankind."

"Amid the coronavirus pandemic, the China-proposed BRI has contributed enormously to enhancing mutual trust and building people-to-people bond between China and countries along the route. It will definitely remain as China's key focus strategy in the future," Lan said.

According to a statement sent by the China State Construction Engineering Corp, the company on Tuesday donated a batch of much-needed medical supplies to Egypt, including 10 ventilators, 500,000 surgical masks, 50,000 protective masks, 2,000 sets of protective suits, 2,000 face shields and 6,000 pairs of disposable gloves.

The company's donation and its efforts to walk a fine line between epidemic prevention and resumption of production have received praises from the Egyptian government. Egyptian Minister of Housing, Utilities and Urban Communities Essam al-Gazar, said Tuesday that the company has cooperated well with the Egyptian government and various local partners and has adopted a fully closed project management model, which has ensured not only the health and safety of employees, but also its project's construction progress. The minister also noted that the company's effective measures are worth promoting in Egypt's engineering construction field.