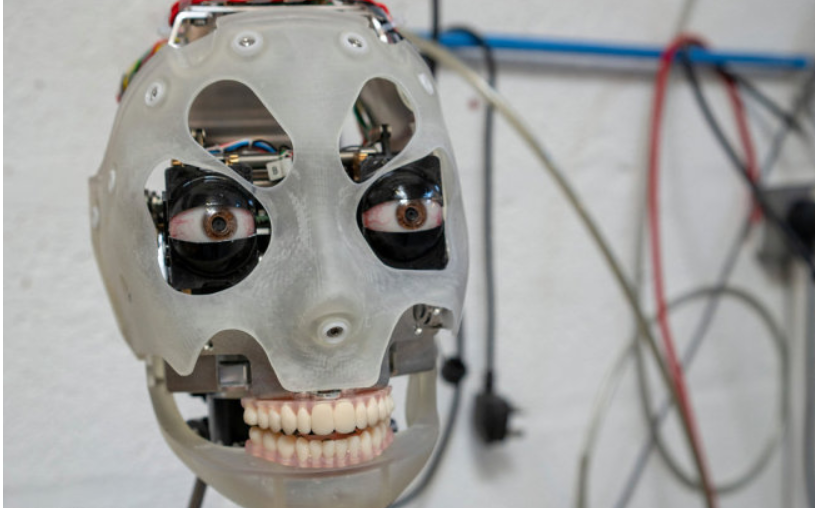 The head of "Ai-Da," a humanoid robot capable of drawing people's likenesses, in the offices of robotics company Engineered Arts, in Falmouth, UK, February 7, 2019. (Photo: VCG)

Named after British mathematician and computer pioneer Ada Locelace, "Ai-Da" is said to be able to draw people by sight with a pencil via its bionic hand.

Designers say "Ai-Da" uses cameras in its eyeballs which are capible of recognizing human features.

Designed and built by Engineered Arts in the UK, "Ai-Da's" creators are planning to adapt the technology to a "RoboThespian" body, which engineers say will have expressive movements. The robot will also have the ability to talk and answer questions.

"RoboThespian is the ultimate acting humanoid designed for human interaction in a public environment," according to a statement from Engineered Arts.

British gallery owner Aidan Meller, who is overseeing the final stages of "Ai-Da's" construction, says the robot is both incredibly compelling to look at, as well as engage with. To make the robot seem life-like, its makers are using "Mesmer" technology to give "Ai-Da" human-like expressions. Once finished, the robot will also be given a mixed-race appearance through its silicone skin, as well as 3D printed teeth and gums.

Engineered Arts also says "Ai-Da" will be presenting its drawings at its inaugural exhibition, "Unsecured Futures," at an event at University of Oxford sometime in May.