As global carmakers transform into intelligent mobility service platforms, more deals with Chinese IT companies were launched to promote localization and better serve customers in the world's largest auto market. 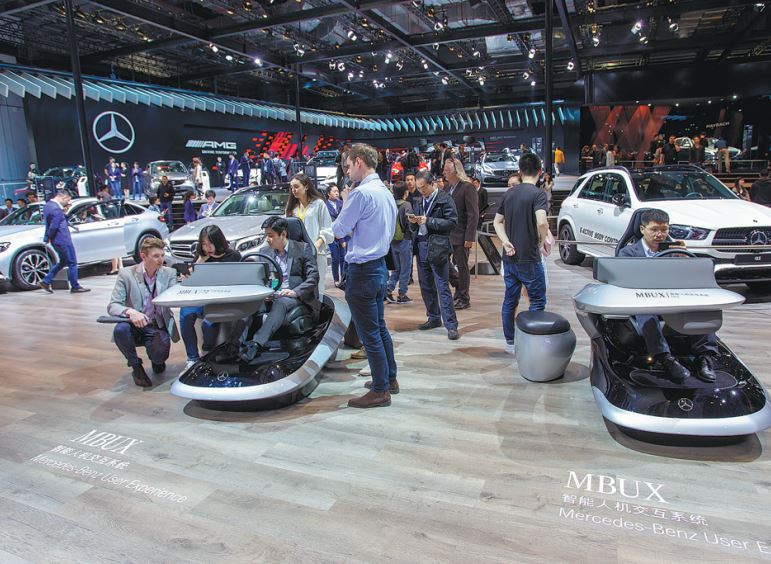 The latest cooperation is between Mercedes-Benz's passenger vehicle Chinese R&D center and IT giant Xiaomi. They are working to build the XiaoAi voice system into its vehicles, Sina Finance reported on Wednesday.

At the CES Asia show in Shanghai early this month, the carmaker showcased the Mercedes-Benz User Experience Infotainment System. It allows drivers to control appliances back home through verbal instructions, such as turning on a sweeping robot or the air conditioning.

Another German auto giant, BMW, reached a deal with leading Chinese IT company Alibaba early this year at the CES in Las Vegas, United States. They will integrate its intelligent voice assistant, Tmall Genie, into cars including the BMW 3-and 5-series range. The service will become available later this year.

Dieter May, former vice-president of BMW digital products and services, said that the cooperation marked a milestone of vehicle connectivity. This is because BMW is building a digital ecosystem in China.

With the integration of Tmall Genie and BMW, the carmaker will provide more convenient and quick services for Chinese customers.

This is not the only deal between Alibaba and carmakers.

Heinz-Willi Vassen, director of Audi China R&D, said that China is Audi's first market to feature the voice interactive system in cars. He said Chinese customers are more open and willing to try new technologies compared with other countries.

According to China Unicom, the number of Chinese users of V2X - vehicle to everything technology - will surpass 40 million by 2020. They are to account for more than 60 percent of the world's market. It is expected to be worth more than 200 billion yuan ($29.19 billion).

There is fierce competition between global IT companies in this market. In addition to Alibaba, Xiaomi and Baidu, world-leading IT companies Amazon and Google are providing vehicle connectivity technologies. Carmakers will prefer Chinese IT companies, who know more about Chinese customers and can satisfy their requirements, according to John Zeng, managing director of LMC Automotive Shanghai.

He said that there will be more partnerships between Chinese IT companies and global carmakers under the need of localization.

One example is NavInfo. The mapping service provider, based in Beijing, has become one of the most reliable partners of global carmakers in the Chinese market.

NavInfo has served more than 40 auto companies and it cooperated with BMW earlier this year to offer mapping and relevant services for its models in China from 2021 to 2024.

Chinese IT companies are in the front ranks in some technologies, such as Xiaomi playing a leading role in developing intelligent appliances and its voice interaction system, Zeng added.

Compared with foreign carmakers, Chinese auto brands are faster in the arena of intelligent mobility services and have launched deeper cooperation with IT companies than those with app-level projects, Zhang said.

It is the first Chinese model to offer an internet-connected car. The model features an operating system of Banma network, which is codeveloped by SAIC and Alibaba.

Zhang said the relationship between carmakers and IT companies is a combination of competition and cooperation.

This is because carmakers will continue developing their own intelligent systems. Volkswagen announced on Tuesday that they plan to set up a car software department with 5,000 software engineers. It expects to improve the proportion of the software it develops from less than 10 percent currently to at least 60 percent by 2025.