Eighty-six-year-old chief designer of China's Shenzhou spacecraft Qi Faren has been honored with the 2019 International Astronautical Federation (IAF) Hall of Fame Award, an honor which is intended to create a standing forum of personalities that have contributed substantially to the progress of space science, technology, and space benefits to mankind, the committee wrote.

Serving as a well-known space technology expert, Qi is also one of the leading technicians of China's first satellite—Dong Fang Hong-1.

Up to 10 recipients will be awarded every year, according to IAF. The induction into the IAF Hall of Fame is recognized by the award of a certificate presented during the closing ceremony of the International Astronautical Congress, a major international space conference held in Washington annually.

But what is unusual this year is that Chinese delegates were all absent from this year's space gala. Reporter Tim Fernholz from Quartz, who attended and covered the event, posted that "a big question at today's gathering of space agency leaders: Where is China?" on his personal Twitter account. 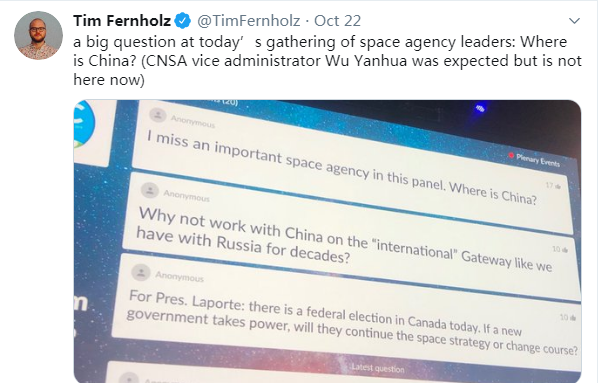 According to the organizer's invitation list, the vice chairman of the China National Space Administration (CNSA), Wu Yanhua, was supposed to show up at the event. The news can also be verified from Reuters reporter Joey Roulette who had covered the opening ceremony and once thought China's delegation was going to be on stage along with Germany, Russia, Canada, India, France, Japan, and the U.S. It turned out Wu didn't appear. 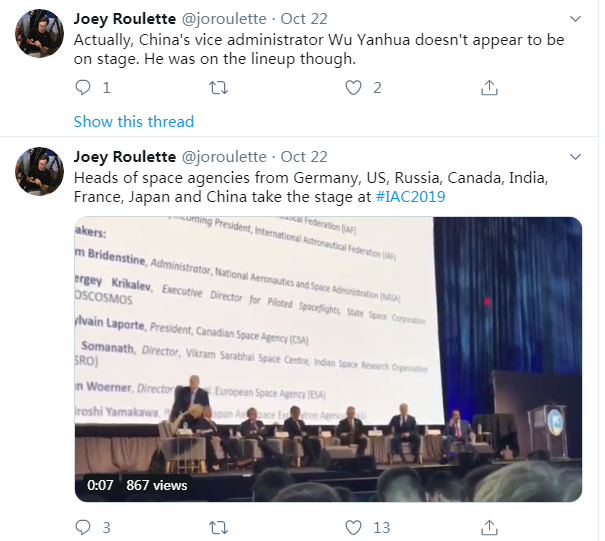 Incoming IAF president Pascale Ehrenfreund explained China's Wu Yanhua couldn't make the panel due to a "time constraint." But Jan Woerner, the head of the European Space Agency, told Quartz that he believed Yanhua was unable to obtain a visa to enter the United States.

At last Wednesday's press conference, Chinese foreign ministry spokeswoman Hua Chunying also confirmed that the delegation was absent from this year's IAC because the U.S. authorities had failed to grant visas in time.

Representatives had applied for the visas in July. On October 12, the delegation from the CNSA went for visa interviews at the U.S. embassy, but the head of the delegation still did not have his visa as the congress began, Hua said. "This caused the Chinese delegation to be unable to attend the opening of the International Astronautical Congress."

The U.S. embassy said it was unable to discuss individual visa cases as they were confidential under U.S. law. The State Department did not immediately respond to a request for comment.

Other than China, Russia recently complained to the United Nations that the U.S. did not grant visas "to a number" of its delegates, including members of the Russian parliament, to attend meetings of the U.N. General Assembly and its committees and for a Comprehensive Nuclear-Test-Ban Treaty conference.

In a September 30 letter to U.N. Secretary-General Antonio Guterres, seen by Reuters, Russian U.N. Ambassador Vassily Nebenzia accused Washington of violating its obligations as the host country for the world body's headquarters.