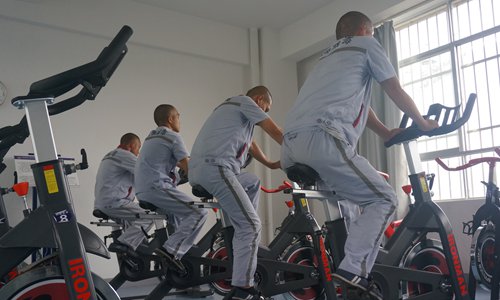 The Ministry of Justice held its first international conference on drug addiction treatment Wednesday in Southwest China's Yunnan Province bordering the drug-infested Golden Triangle, to give China's answers on drug rehab.Nearly 100 experts from 14 countries and regions attended, including the US, Thailand and Australia, who shared their experience and unique challenges of drugs in their own countries.Chinese delegates at the conference said that in China, sports-based drug rehabilitation has become a new trend across the country. Since 2018, a pilot project has been carried out in 24 drug rehabilitation facilities in 11 provinces.During the visit to the fifth compulsory isolation and drug treatment center in Kunming, capital of Yunnan Province, Global Times saw that 148 piece of fitness equipment had been installed in the rehabilitation training center, a 2,800 square-meter space for sports-based drug rehab. Inmates participating in dynamic bike and rowing training were wearing smart bracelets that recorded their blood pressure, heart rate and other physiological data.Addicts also do group gymnastics and dragon dance on the square of the fifth rehab center. These activities aim to help inmates establish a positive and lively attitude to treatment, the instructor told the Global Times on Wednesday.By the end of December 2018, 214,300 drug addicts had been registered in drug rehabilitation centers under compulsory isolation in China's judicial administrative system, according to a report by the justice ministry on Tuesday ahead of International Day against Drug Abuse and Illicit Trafficking which falls on Wednesday.Among them, 89.69 percent were male, and 88.33 percent were young adults under 50 years of age.Their educational level was generally low, and the drugs they consumed were mainly methamphetamine and heroin. More than 1.44 million drug addicts have been forcibly segregated for drug treatment in the past 11 years since the Anti-Drug Law was implemented.More than 106,000 drug addicts have been rehabilitated through drug treatment, helping them get rid of their addiction and return to society. New technologies and methods are applied in drug rehabilitation including virtual reality drug addiction assessment and correction systems.Viroj Sumyai, the former president of International Narcotics Control Board who visited one of the rehab centers in Yunnan told the Global Times that he was impressed by the organized management and high-technical treatment facilities in the center. The compulsory isolation measure applies to those who are seriously addicted to drugs but are not suitable for rehabilitation in the community. These addicts undergo treatment in closed facilities for a period of two years. By the end of 2018, there were 370 compulsory isolation rehabilitation centers around China under the judicial administrative system. Each province has at least one facility for female drug addicts. There are six to 12 beds in each dormitory at these drug rehabilitation facilities.Special ward management measures are put in place for drug addicts with HIV/AIDS, and antiviral drugs are provided by the state free of charge.Mental health files of drug addicts have been established at drug rehabilitation facilities. Mental health education has also been spread, regular psychological assessments are carried out, and inmates' mental health status is tracked throughout the process.More than 20 psychotherapeutic techniques, such as sandplay therapy, music therapy, desensitization training and motivational interviews, are used in drug rehabilitation facilities to help drug addicts adjust their mood, adapt to the environment and improve their physical and mental health.More than 85 percent of drug addicts have participated in vocational education and training, such as beautician and electrical technology courses, which prepare them to return to society and make a living on their own.The Global Times saw that the canteens in the rehab serving addicts are staffed by safety administrators, nutritionists and other professionals, and equipped with vegetable pesticide residue detectors and disinfection cabinets to ensure food safety."It is more advanced than many other countries in the world, even better than west countries. I can feel the respect to addicts' human rights and there is no violation against their basic interests as far as I know," Sumyai said.