The construction of the 500-kilovolt (kv) ultra-high voltage submarine cables laid beneath the Zhoushan Strait in east China's Zhejiang Province was completed on Sunday, which is expected to further promote the development of the local economy. 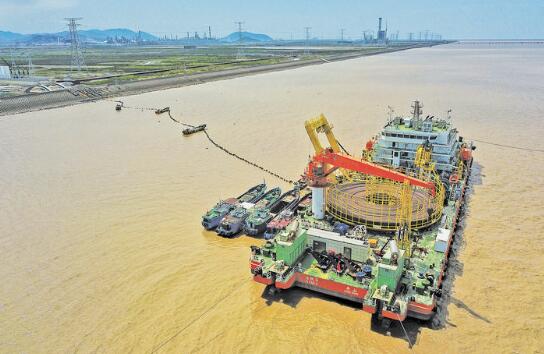 Linking the power grids between Zhoushan and Ningbo city in the province, the 17-kilometer cable is the first domestically-made 500kv submarine cable, and also the world's first 500kv cross-linked polyethylene insulated submarine cable, which is more safe and eco-friendly.

"Back then we had two plans. One is to use the imported submarine oil-filled cable, but it can only load 600,000 kw, failing to meet our need. So we abandoned it. The experts discussed this issue and analyzed all parameter requirements, figuring out that we have the capability to produce the cross-linked polyethylene insulated submarine cable by ourselves. If we succeed, the cable can load 1.1 million kw," said Xuan Yaowei, deputy manager of Zhoushan Power Supply Company.

To lay the submarine cables, the State Grid Corporation specially built China's first workboat which is able to load cables weighing 5,000 tons. With completely independent intellectual property rights, the boat can lay and maintain cables and operate as normal in a violent storm.

To lift and install the heavy parts of the towers high above the ground, the technicians independently developed a device, which can hoist an object weighing 30 tons.

Zhoushan is the last city in Zhejiang Province that doesn't have the 500kv power transmission lines. When this project is put into operation, the days when Zhoushan only has the 220kv grid frame will be history and it will greatly boost the development of the local economy.

Since the Zhoushan Archipelago New Area was established in 2011, several state-class projects have settled there, leading to a surge in electricity consumption. To solve the problem, China's State Grid Corporation started to build the Zhoushan 500kv Power Transmission Project in December 2016.

"When this project is put into operation, it will fill the gap of Zhoushan's 500kv power grid and will expand Zhoushan islands' transmission capacity by 3.3 times, which will greatly meet the power demands of the construction of the Zhoushan Archipelago New Area and Zhejiang Free Trade Zone and meet the power demands of the key projects in the next 5 to 10 years," said Zhang Yi, deputy director of the Zhoushan Municipal Development and Reform Commission.