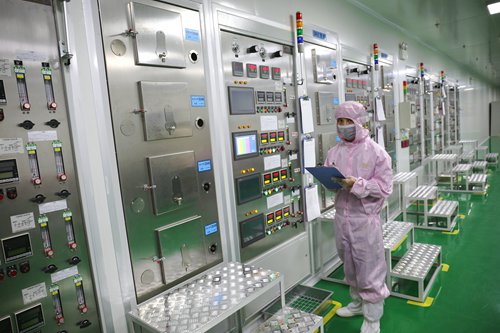 A worker inside a chip plant in Chizhou, East China's Anhui Province in November 2017. (Photo: VCG)

China is cutting taxes on software and integrated circuits enterprises while the US imposes export controls that threaten to stifle Chinese IT companies, including Huawei, and industry observers said that if Chinese firms successfully replace foreign suppliers, US firms could lose.

China's Ministry of Finance said in a statement on its website on Wednesday that China will offer preferential income tax treatment to companies involved in integrated circuit design and software, in an effort to support the development of the industry.

These companies can be exempted from paying income taxes in the first two years if they were profitable before the end of 2018, the finance ministry said in the statement. The income tax rate for those firms will be halved to 12.5 percent from 25 percent in the third to fifth year, the ministry said.

The statement comes amid an escalating trade war with the US.

The US-launched trade war is not only about imposing tariffs against Chinese goods, but also putting Chinese IT companies on a supplies blacklist.

Most electronic devices, such as smartphones and tablet computers, are assembled in China, but its manufacturers usually use microchips and other components produced by vendors from the US, Japan and the island of Taiwan, a Shenzhen-based expert in the software industry who requested anonymity, told the Global Times on Wednesday.

China is making efforts to develop its own software and integrated circuit suppliers to reduce the risk of relying too much on foreign vendors, especially those from the US, according to the expert.

"In other words, the US is forcing China to make such changes, otherwise, US suppliers can continue to profit from the great demand of Chinese manufacturers. So maybe a few years from now, US suppliers will lose this market if the trade war and the US blacklist policy continue in the long term and China successfully replaces US suppliers," the expert told the Global Times.

Bai Ming, deputy director of the Ministry of Commerce's International Market Research Institute, told the Global Times on Wednesday that "Microchips and other components are just like 'food' for the IT companies, so they are quite basic and essential."

"The government is providing a direction, and telling the market that the software and integrated circuit industries will be a hot field to invest in, which means relevant companies will not only pay lower taxes, but will also receive huge investments," Bai said.

When China is determined to solve a problem, the problem will normally be solved, and it's just a matter of time, the Shenzhen-based expert noted.