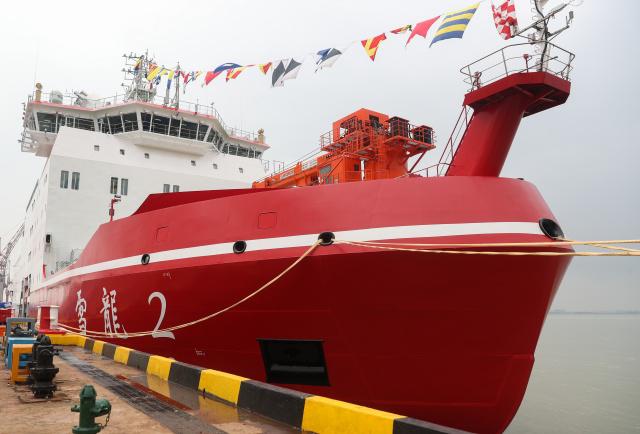 The first self-developed icebreaking research vessel of China – Xuelong 2, or Snow Dragon 2, was completed and delivered to the Polar Research Institute of China on July 11, the Maritime Day of China.

Expected to hit the ice of both the Antarctic and Arctic this year for expedition, the research vessel will improve China’s capability to conduct scientific investigations within the polar regions.

Compared with its predecessor Snow Dragon, the Snow Dragon 2 is equipped with two-way icebreaking technology – the first of its kind in the world, and is able to continuously break ice as thick as 1.5 meters - with 0.2 meters of snow on top - at speeds of 2 to 3 knots, introduced Zhao Yanping, captain of the vessel. It will greatly expand the coverage and duration of Chinese polar expeditions, Zhao added.

The idea to build a new polar expedition vessel originated in 2008 when Chinese scientists found the Snow Dragon was not able to meet the demand of investigations.

Though vessel-based scientific expeditions to Antarctica were mostly conducted in summer, global expedition teams still couldn’t get through the ice shelf regions due to limited icebreaking capability.

According to Wu Gang, chief designer of the Snow Dragon 2, the latest icebreaking vessel of China is a result of cooperation between Chinese and foreign companies. The basic design of the vessel was completed by Finland’s Aker Arctic Technology, but Chinese institutes and enterprises also had an in-depth participation during the whole process, Wu said.

He stressed that Chinese and foreign parties were highly integrated in the cooperation of the designing of the vessel.

In order to break thick ice layers, the Snow Dragon 2 is built with special steel, and its covering parts measure 100 millimeters at their thickest point.

In addition, a total of over 7,000 smart sensors are installed in the body and equipment of the expedition vessel, which enables the Snow Dragon 2 to monitor its service life and collect the data of friction between the vessel and ice. This will offer a reference for building new vessels in the future, Wu said.