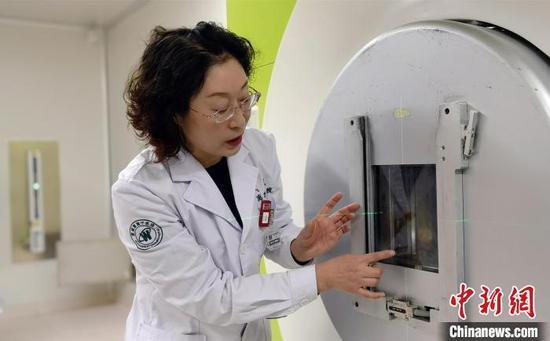 A total of 303 bladder cancer patients around China have seen expected results after receiving carbon ion cancer treatment thanks to the first such system applied at Wuwei Cancer Hospital in Gansu Province.

It is the first non-invasive carbon ion therapy for bladder cancer in the world.

China has become the fourth country in the world to treat cancer with heavy ion beams since its self-developed carbon ion cancer treatment system was put into operation in March, 2020. A year of clinic trial has put Wuwei Cancer Hospital on par with the world's existing heavy ion treatment centers in terms of patient quantity and treatment quality.

Compared with traditional bladder cancer treatment methods, heavy ions can accurately control changes of bladder volume and position, so the area with a large dose of heavy ions will be embedded in the tumor for "precise blasting". This treatment is non-invasive, painless and can protect bladder functions, thus patients can be discharged on the same day after treatment.

The method works by accelerating carbon ions to around 70 percent of the speed of light and then blasting these ion beams at a tumor, destroying its cell DNA and ultimately killing them, according to Ye Yancheng, the director of Wuwei Cancer Hospital.

Clinical research on heavy ion therapy for refractory tumors like pancreatic cancer and glioma will be carried out in the near future, said the person in charge of the Heavy Ion Center of Wuwei Hospital.

Carbon ion therapy is well-recognized for tumor treatment in the international medical community, which can be widely used to kill various solid tumors whose surrounding tissues are tolerable. Previously, this technology was monopolized by foreign countries for a long time.