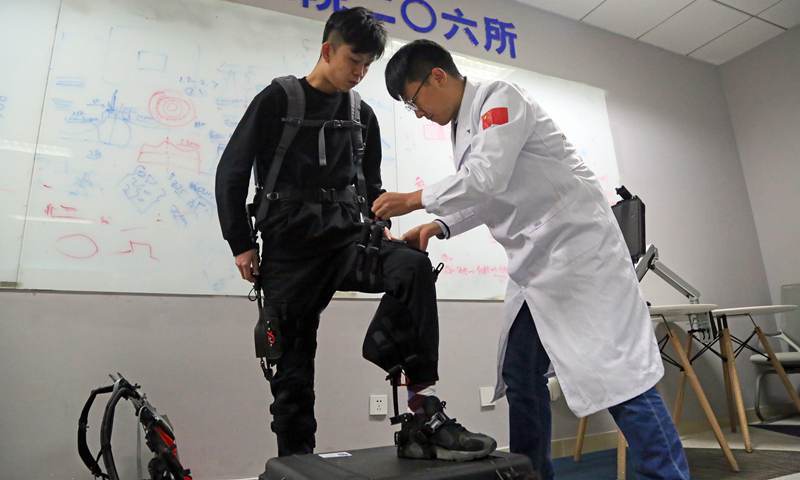 Chinese scientists have recently developed an exoskeleton system specially designed for high-altitude regions, and the equipment is expected to conserve users' energy in tasks including patrol and logistics support.

A number of agile, non-powered exoskeletons developed by the Human Function Enhancement Technology Research center under the State-owned arms contractor China Aerospace Science and Industry Corp (CASIC) have been delivered to a client, the Global Times learned from the research center on Tuesday.

The exoskeletons are expected to be used in tasks in high-altitude regions, including patrol, transportation of goods and logistics support, according to the equipment's developer.

Zhang Lijian, head of the research center, told the Global Times that in the harsh environment of high-altitude regions, other devices like aerial drones and robotic dogs may face difficulties reaching their intended destinations due to strong winds or challenging terrains. That is why traditional manual work is still necessary.

But in high-altitude regions, due to the lack of oxygen, goods that weigh 1 kilogram feel like 5 kilograms, and at an elevation of 3,500 meters, a human being's physical capabilities decay to only 70-75 percent of normal level, Zhang said.

Thanks to the usage of carbon fiber materials, the exoskeleton weighs only about 4 kilograms, and it is very durable despite possible rough usages in high-altitude, mountainous regions, the developer said, noting that to counter the extreme cold and wear-and-tear issues, the equipment does not contain any plastic.

Hand-on experience by Global Times reporters on Tuesday found that putting on the superlight carbon fiber-composed gear takes less than a minute and it's easy to use it in walking, leaping and running.

To better understand the energy-saving function of the gear, Global Times reporters put on a 25-kilogram backpack for testing, and it worked wonders. One can easily carry such a weight in a rather relaxed fashion and manage to move up and down without developing pain or soreness in the back or shoulders.

Without the gear, the 25-kilogram backpack was quite hard to carry, let alone tread on complex terrains.

Global Times reporters found that taking off the gear would take around 10 seconds.

Zhang said that it took only about 20 days to build the first batch of dozens of exoskeletons, which are currently priced at less than 50,000 yuan ($7,565) each. Based on customer demand, production can be accelerated to 1,000 units a month, and the unit price can be reduced.