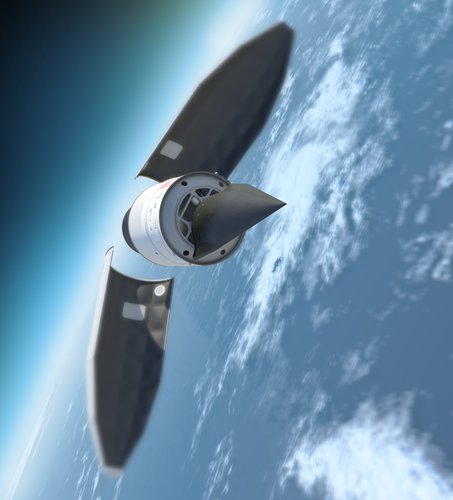 Pictured is an illustration of US experimental hypersonic aircraft Falcon HTV-2. (Photo: IC)

Chinese scientists have developed a new heat-resistant material for hypersonic aircraft which can endure over 3,000 C from friction caused by a Mach 5-20 flight within the atmosphere.The lead scientist on the project said the material outperforms all similar foreign-made ones with its high melting point, low density and high malleability.The new material enables a hypersonic aircraft to fly at Mach 5-20 within the atmosphere for several hours, as the high heat resulting from the friction between the aircraft and the air reaches between 2,000 C to 3,000 C, a temperature normal metal would not be able to endure.  Normal metals melt at around 1,500 C, but this new material can bear over 3,000 C for an extended period, state-owned Hunan Television reported recently.Unlike foreign technologies that use traditional refractory metals and carbon-carbon materials, the China-made new material is a composite of ceramics and refractory metals, Fan Jinglian, the lead scientist who developed the material and a professor at Central South University in Central China's Hunan Province, told the Global Times.The combination of ceramics and refractory metals makes the material far more efficient than foreign-made ones, and this technology is world-leading, Fan said.In a simple analogy, Fan likened her composite to concrete cobble. "Think of the ceramics as the cobblestones, or the pellets, and the refractory metals are like the concrete. In high temperatures, the ceramics will act as pellets that pin the refractory metals, so they will not soften and deform."As a result, the material not only has a high melting point, but also valuable characteristics such as low density and high malleability, according to the Hunan Television report.China launched a major hypersonic aircraft project in 2009, and most Chinese scientists considered using carbon-carbon materials instead of metals back then.Fan was questioned for her proposal to use such a material, but she insisted on making a sample, which came into being in 2012 and showed great potential.As of March, the material has been used for products in a variety of fields including aviation, space exploration, shipbuilding and national defense, Hunan Television reported.Hypersonic aircraft is not the only area in which materials made of ceramics and refractory metals can shine, Fan said. Any field that involves extreme high temperature, such as engines, space rockets and nuclear reactors, will have a great demand for the material, Fan noted.China launched the Xingkong-2 waverider hypersonic flight vehicle via a rocket in a target range located in Northwest China in August 2018.On Tuesday, East China's Xiamen University launched the Jiageng-1 hypersonic aircraft with a double-waverider design.The test was part of the university's project to try to quintuple the current speed of civil aircraft to achieve global direct access within two hours, the Xinhua News Agency reported on Tuesday.It is unknown whether Fan's material was used in these two cases.