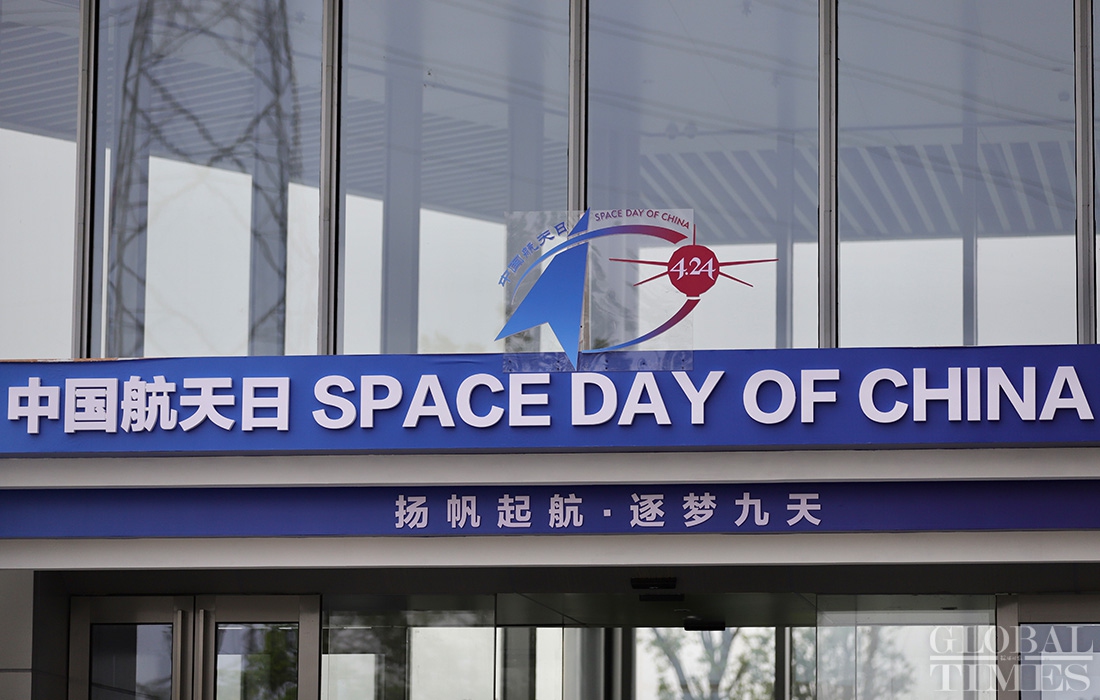 Having achieved numerous milestones in the space sector in 2020 and ahead of the upcoming landing of its first Mars probe as well as the launch missions for China’s space station construction, China kick-started Space Day annual celebrations in Nanjing, capital East China’s Jiangsu Province, with announcements of more and exciting space plans like a joint moon base with Russia.

Themed "Voyaging into space, pursuing dreams," this year’s Space Day of China provides a window not only for the Chinese public, but also the world to get a better understanding of China’s aerospace progress.

The Global Times found Saturday that envoys and representatives from a dozen countries and international organizations, such as Russia, the US, Pakistan, Bangladesh, Australia and the Asia-Pacific Space Cooperation Organization (APSCO), participated in the opening ceremony for the Space Day of China 2021.

“I am proud of participating in such a Chinese event,” a representative from Bangladesh told the Global Times on Saturday, as he walked in awe, browsing what he called a “marvelous exhibition” featuring lunar samples retrieved by the Chang’e-5 robotic lunar probe in 2020.

Aside from moon samples, the parachute and return capsule of the robotic lunar probe were also displayed in the exhibition, which, according to the China National Space Administration (CNSA), is the first display of its kind to be held outside Beijing.

“I am really impressed with all the achievements and progress China is making in space. It is extraordinary and incredible. It is really amazing for everyone here to see how China has progressed throughout the years in space,” Aisha Jagirani, director general with the Department of External Relations and Legal Affairs under the APSCO, told the Global Times on Saturday.

Aisha said what impressed her the most at the event was “the history of development of Chinese rockets; how China in a short span of time has developed space technology, explored the moon and Mars also… That is really amazing and encouraging.”

China designated April 24 as Space Day in 2016 to mark the anniversary of the country's first satellite launch, Dongfanghong-1 in 1970. 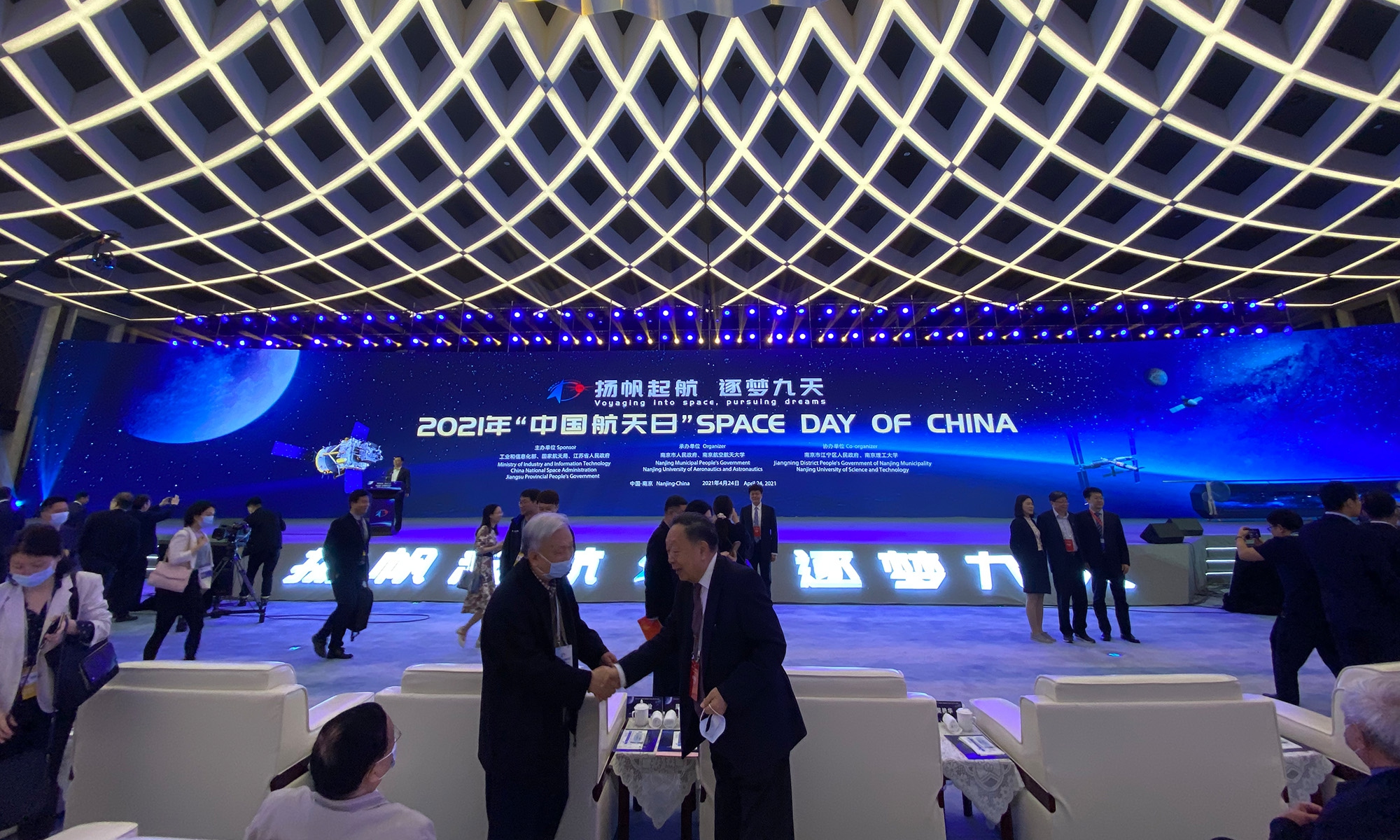 The Long March-5B carrier rocket, a shorter version of Long March-5, the strongest member of the Long March launch vehicle family, made its successful maiden flight in May 2020, successfully sending a new-generation manned spaceship into space.

The Chang’e-5 lunar probe concluded an epic Earth-Moon round trip, and managed to carry some 2 kilograms of lunar samples back to Earth on December 17, 2020, making China the third country in the world to achieve such a feat, and the first in more than four decades.

The success of the Chang’e-5 lunar mission also involved several breakthroughs in China’s space technology, including the first-ever sample collection on the lunar surface, a complex takeoff from the rough lunar terrain, and most challenging of all, the rendezvous and docking in lunar orbit, which are all believed to build a solid foundation for future manned lunar missions.

Also, in 2020, China launched the country’s first independent Mars probe mission, Tianwen-1, and the craft reached Mars’ orbit in February this year. China’s Tianwen-1 will deploy a lander and a rover bundled together for landing at Utopia Planitia in mid or late May.

On Saturday, CNSA deputy head Wu Yanhua officially unveiled the name of China’s Mars rover to be Zhurong, named after that of a fire god in Chinese mythology, at the opening ceremony.

Hopefully, by giving such a name to the rover, it will ignite the spark of China's interplanetary exploration and guide humanity deep into the vast and still unknown outer space, according to the CNSA.

China in August 2020 launched the full global service of the BeiDou Navigation Satellite System – or BDS – China’s largest space-based system and one of four global navigation networks, alongside the US' GPS, Russia's GLONASS and the European Union's Galileo. 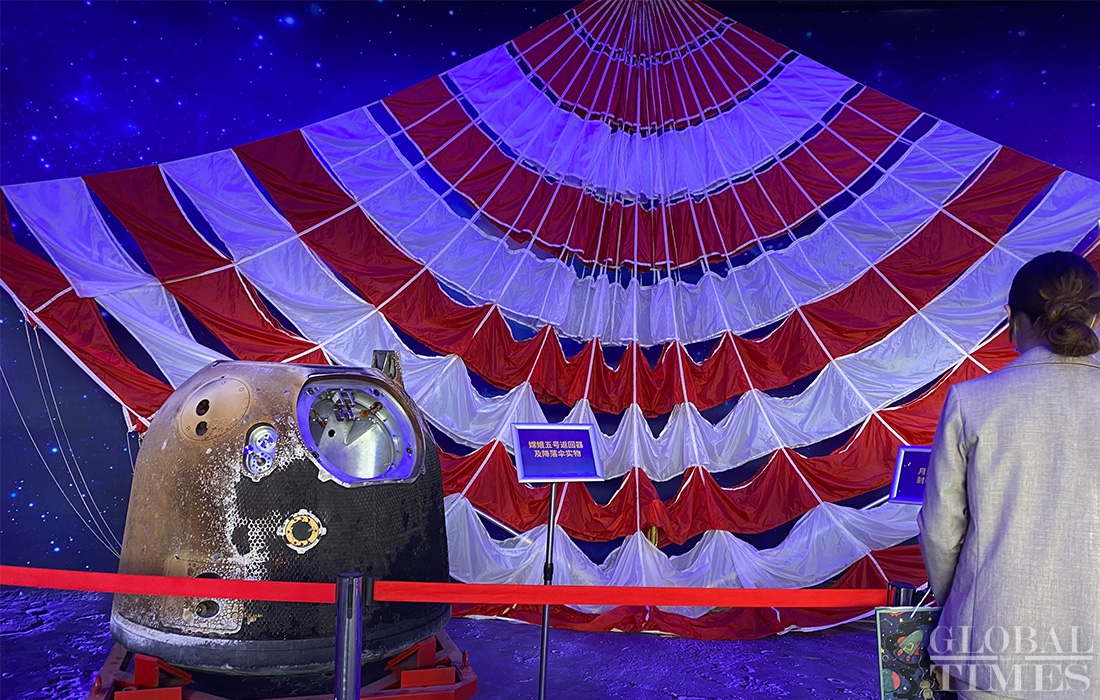 Photo shows the Chang'e-5 return capsule and parachutes at the opening ceremony on the Space Day of China on April 24, 2021. (Photo: Global Times)

As the centerpiece of an ambitious 2021 in space, China is slated to carry out consecutive missions for the construction of a space station which is to become fully operational by around 2022, exactly three decades after China approved the manned space project in 1992.

China’s space station is set to operate for 10 years, but can be extended to 15 years under proper repair and maintenance, developers have told the Global Times.

Following the core module’s launch, the cargo spaceship Tianzhou-2 is expected to be sent to space in May if system evaluation goes smoothly. The Shenzhou-12 crewed spacecraft is scheduled for launch in June, sending astronauts to orbit for about three months, during which the regenerative life support system and maintenance will be tested.

China has scheduled 11 launches for space station building in the next two years, including four manned missions and four cargo missions.

CNSA and its Russian counterpart Roscosmos issued on Friday a joint declaration on cooperation in the creation of the International Scientific Lunar Station (ISLS), with the two sides emphasizing that the ISLS is open to all international partners interested in cooperation.

CNSA deputy head Wu Yanhua said in a statement the agency provided to the Global Times on Saturday that China and Russia will work with other international partners in the cooperation of building the ISLS.

The ISLS will be another major contribution that China and Russia shall make to the promotion of long-term and sustainable development of UN outer space activities, Wu said.

Such a joint declaration also showcased the determination and confidence of China-Russia cooperation in the field of lunar and deeper space exploration, the CNSA told the Global Times.

The ISLS is a complex set of experimental research facilities created on the surface and/or in the orbit of the moon with possible involvement with other countries, international organizations and other international partners, said the joint declaration.

It is designed to carry out multidisciplinary and multipurpose research activities, including the exploration and use of the moon, lunar observations, fundamental research experiments and technology verification with the possibility of long-term unmanned operation with the prospect of ensuring human presence, per the document.

China and Russia clarified in the joint declaration that ISLS is open to all international partners interested in cooperation in the planning, justification, design, development, implementation and operation of the ISLS, strengthening research exchanges and promoting peaceful exploration and use of outer space for the interests of all humankind.

To support the ambitious plan of building a moon base, Mou Yu, an official with China’s Academy of Launch Vehicle Technology’s general designing department, disclosed in his speech at a session of the China Space Conference, which started also Saturday, that China is developing a 10-meter-diameter heavy-lift carrier rocket.

Such a rocket would be capable of launching a payload of no less than 50 tons to the lunar orbit, which will strongly support the moon base building, as well as even bigger scale lunar exploration activities, Mou told the Global Times.

Besides the future ISLS, China will also host international experiments on its upcoming space station, as it might be the only one of its kind in orbit after the International Space Station’s retirement.

China and the United Nations Committee on Peaceful Uses of Outer Space (COPUOS) announced in June 2019 that the first batch of nine international scientific experiments of 17 countries and 23 research bodies would be included in China’s space station.

The first batch of selected space science experiments to fly to China’s space station include Gamma-ray burst polarimetry jointly proposed by Switzerland, Poland, Germany and China and a spectroscopic investigation of nebular gas by India and Russia.