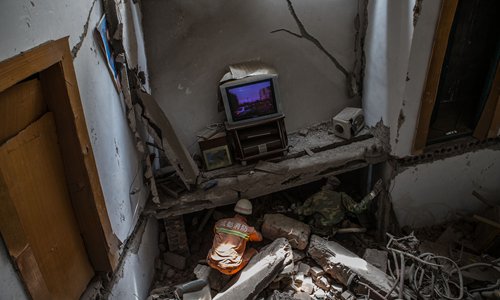 A depiction of one firemen and one soldier rescuing victims from the rubble exhibited at the Wenchuan Earthquake Museum. (Photo: Global Times)

China's earthquake early warning system is the "fastest in the world," Chinese seismologists asserted on Sunday, crediting high-technology and artificial intelligence to a delay of 6.2 seconds.

This made the average response time of China's system "the fastest in the world," Wang said.

Wang said if there was an early warning system at that time, perhaps there would have been 30 percent fewer deaths.

China's early warning system also covers the largest area in the world, according to a document that the public affairs department of the Institute of Care-life sent to the Global Times on Sunday.

The early warning success rate came about through the introduction of cutting-edge technology, according to Wang. Artificial intelligence identifies seismic waveforms and reduces false alarms, he noted.

The warning system can still be improved, experts agree.

Electromagnetic waves travel faster than seismic waves, meaning people in areas outside the epicenter can use the time difference to protect themselves, "but it cannot play a role in reducing disasters in the hardest-hit areas," Sun Shihong, a China Earthquake Networks Center researcher, told the Global Times on Sunday.

China in 2018 began using the world's first cloud image system based on sensory technology to release more timely and reliable warnings for earthquakes.

Wang's team uses a cloud image system that involves deep-buried sensors that can detect stress and energy dynamics 8 to 20 kilometers below the surface.

"Earthquake prediction technology, an unsolved global and technological problem, is expected to be well tested within three years," Wang said.