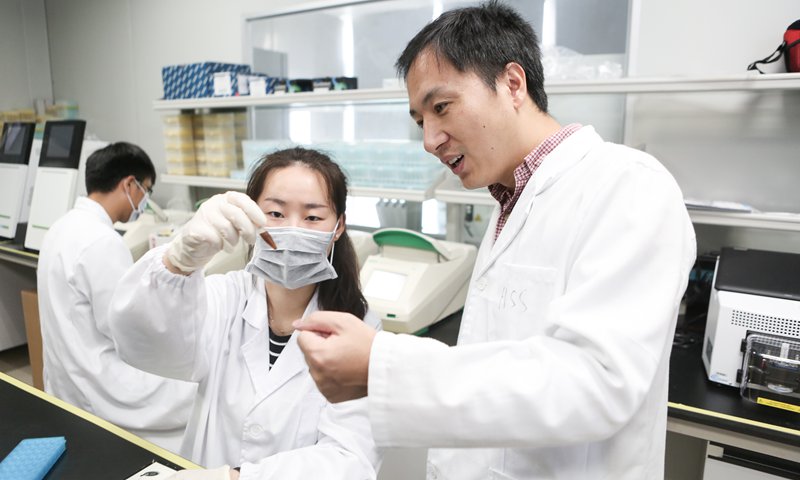 He Jiankui (right), an associate professor of the Southern University of Science and Technology's biology department, conducts an experiment with his assistant. He claimed to have successfully made the world's first genetically altered babies, generating ethical concerns and waves of criticism from around the world. (Photo: VCG)

Experts hailed the move claiming it will promote rational utilization of human genetic resources and contribute to global biomedical development.

The regulation stipulates that China prohibits the sale or purchase of human genetic resources. However, resources provided for scientific research with reasonable expenses shall not be deemed as illegal.

The information on human genetic resources needs to be filed or backed up when used publicly or provided to overseas organizations, persons, or institutions established or controlled by foreign staff.

The regulation stipulates that all information should pass security checks if it is suspected to affect China's public health, national security, and interests.

The regulation is focused on protecting China's human genetic resources and preventing illegal access to use them for biotechnology research and development, such as the gene-edited twins case, the Ministry of Justice and Ministry of Science and Technology said in a press release sent to the Global Times on Monday.

Chinese scientist He Jiankui in November 2018 claimed to have created the world's first gene-edited twins immune to HIV, causing a global ethics whirlwind of condemnation and scorn.

This followed the news of Shenzhen-listed genomics company BGI Genomic in October that was conducting an illegal genetics study with a foreign institute and exporting human genetic resources.

China is home to the largest and most complete human genetic resources representing the East Asian population. Protecting and utilizing such resources will not only serve the health and well-being of the Chinese but also around the world, said Zhao Guoping, an academician from the Chinese Academy of Sciences.

Human genetic resources are materials and information that can be used alone or in combination to identify human body characteristics. They are essential guarantees for the development of disease prevention, intervention, and control, and have become the strategic, public welfare and vital resources for health and life safety, said Jin Li, vice president of Fudan University.