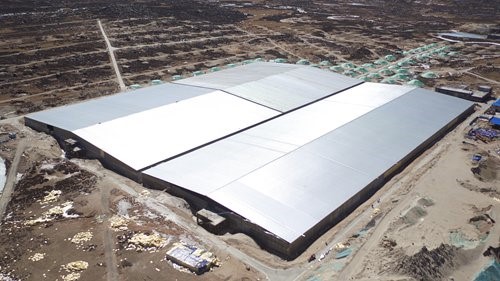 The goal of LHAASO, a basic scientific research project to be completed in 2021, is to discover high energy gamma ray sources, and precisely measure the radiation spectrum of very high energy gamma ray sources and energy spectra of various cosmic ray species over a wide range, according to a press release the Institute of High Energy Physics (IHEP) of the Chinese Academy of Sciences sent to the Global Times.

The project is expected to make breakthroughs concerning the origin of cosmic rays, Cao Zhen, the project’s chief scientist and an astrophysicist with the IHEP, told the Global Times.

Cao noted that the origin of cosmic rays “has puzzled the world for over a hundred years.”

LHAASO’s Phase One detectors include the No. 1 Water Cherenkov Detector Array (WCDA-1) with an active area of 2.25 hectares, as well as two wide-field Cherenkov telescopes and 80 muon detectors and 180 electromagnetic detectors.

The full scale WCDA, which will eventually comprise three ponds, is designed to survey for gamma ray sources above 100 billion eVs, according to the IHEP.

The reason why the scientists picked the 4,400 meters above sea level site is because such a height would enable the facility to receive the richest physics information in the most effective way, Bai Yunxiang, a member of the research team, told the Global Times.

Assisted by the rotation of the Earth, the WCDA will be able to scan over 60 percent of the sky each day. It won't be affected by the light of the sun, moon or stars or by the weather, thus ensuring round-the-clock observation. In the future, the WCDA will be able to record 5 trillion cosmic ray detections each year and obtain more than 4PB of data.

LHAASO is one of China's major national science and technology infrastructure projects and is located in the Mountain Haizi National Reserve at 4,400 meters above sea level.

Since detectors are being distributed across a wide area, LHAASO has begun observation even as construction continues elsewhere on the site, according to the IHEP.