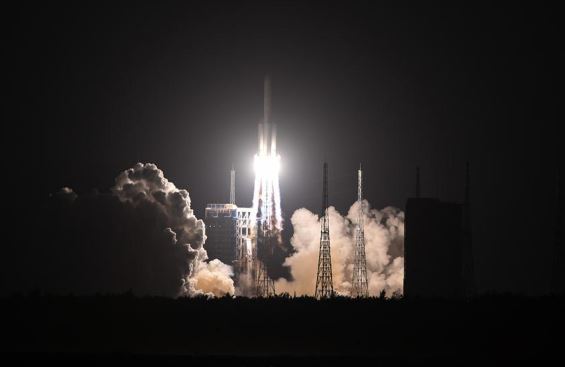 Shijian-20, weighing more than eight tonnes, is the country's heaviest and most advanced communications satellite in geosynchronous orbit, according to its maker, the China Academy of Space Technology (CAST) under the China Aerospace Science and Technology Corporation (CASC).

It will carry out orbit experiments for a series of key technologies, the CAST said in a press release.

It will demonstrate in orbit its heat transfer technology based on cryogenic loop heat pipes, an efficient thermal control device for space applications, to lay the foundation for the development of highly sensitive space probes.

The satellite will test the controllable deformation of shape memory polymers, a type of smart material that can switch between temporary shapes, to pave the way for the development of large variable space structures.

It will also carry out satellite-ground communication tests using Q/V bands, which lie between 33-75 GHz, within the extremely high frequency (EHF) area of the radio spectrum. These frequencies are used mainly for satellite communications.

"The major way to improve the satellite communication capacity is to expand the bandwidth of available frequency bands. If we liken the geostationary orbit to an expressway, which is now the most crowded in space, the use of Q/V bands will help to widen the expressway by four to five times," said Li Feng, chief designer of the satellite with the CAST.

The test is key to the development of the next generation of high throughput satellites capable of delivering 1Tbps bandwidth for ultrafast speeds, he said.

Shijian-20 has the largest solar wings among all China's satellites, with the total wingspan 10 meters wider than that of a Boeing 737 aircraft.

The solar wings will unfold twice, the first time after the satellite enters its orbit and the second after it flies around the orbit for about a week. The increase of the solar wing area will supply the satellite with abundant power.

The satellite adopts a hybrid propulsion system. Chemical propulsion is powerful but inefficient, and is used in rapid orbit change or satellite attitude adjustment to send it to the planned orbit as soon as possible. Electric propulsion is more precise and efficient but less powerful, which is suitable for long-term delicate adjustments in orbit.

Electric propulsion is also a preferred technology for future deep space exploration. Missions to explore Mars, Jupiter and asteroids are all too far away from Earth to be fulfilled by chemical propulsion alone, as it is impossible to bring the amount of fuel needed.

Shijian-20 will also test the adaptability of the DFH-5 satellite platform, which may serve the needs of high-capacity satellites for high orbit communications, microwave remote sensing, optical remote sensing, space scientific exploration, in-orbit service and other purposes in the next 20 years.

"With the government's consistent support for the communications satellite industry in the past decades, we have developed the DFH-3 and DFH-4 satellite platforms, making China one of the few countries in the world that can independently develop large communications satellites and provide in-orbit commercial services," said Hao Yanyan, product assurance manager of Shijian-20 with the CAST.

So far, there are more than 20 communications satellites based on the DFH-4 platforms running stably in orbit.

To meet the pressing needs of economic development, the research and development of the DFH-5 platform started in 2010.

According to the design, the takeoff weight of a satellite based on the DFH-5 platform can reach eight to nine tonnes, and its payload capacity 1,500 to 1,800 kg. The power for the whole satellite is more than 28 kilowatts, while the power for its payload above 18 kilowatts.

"According to these technical indicators, a satellite based on the DFH-5 platform in orbit can provide services equivalent to that of two or three satellites on the DFH-4 platform," Hao said.

The new technologies verified by Shijian-20 will further promote the development of new satellites, especially the high throughput communications satellite and high resolution remote sensing satellite, which is of great significance to the progress of China's space technology, Li said.