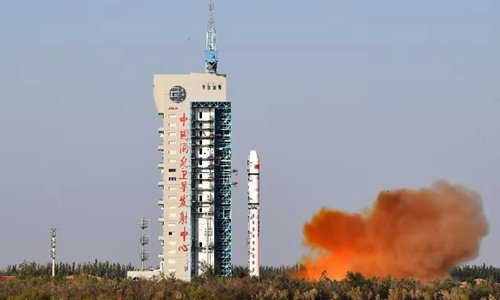 China successfully launched a new satellite on Wednesday that will study the earth's atmosphere, monitor the marine and space environment, help prevent and reduce disasters and conduct scientific experiments.

A Long March-2D rocket blasted off from the Jiuquan Satellite Launch Center in Northwest China's Gansu Province at 8:54 am, carrying the satellite codenamed Yunhai-1 02, the satellite developer told the Global Times on Wednesday.

The satellite and the launch vehicle were both developed by Shanghai Academy of Spaceflight Technology of the China Aerospace Science and Technology Corporation in Shanghai.

The first Yunhai-1 meteorological satellite was sent into orbit in November 2016.

The launch marked the 313th mission of the Long March carrier rocket family.

During the week before the 70th anniversary of the People's Republic of China on October 1, China has sent three satellites into space including two that will form part of the constellation of China's self-developed BeiDou Navigation Satellite System, or BDS.

China's BDS is one of the four space-based global navigation satellite systems in the world, which include the US-launched GPS, Russia's GLONASS and the European Union's Galileo. The BDS system started to provide global service at the end of 2018, as the construction of the BDS-3 primary system had been completed by then.