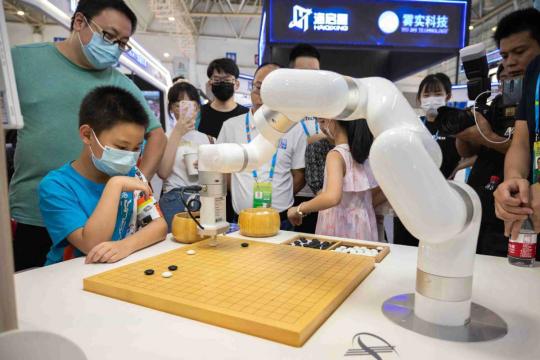 A boy plays weiqi, also known as Go, with a robot at the fifth Digital China Summit in Fuzhou, Fujian province, on Saturday. (Photo: China Daily)

China will leverage digital technologies to further upgrade industrial production, people's lifestyles and governance as part of its broader push to seize new opportunities and respond to new challenges in the next wave of digitalization, officials and experts said.

Huang Kunming, a member of the Political Bureau of the Communist Party of China Central Committee, said more efforts are needed to promote the industrialization of digital technologies and the digital transformation of industries so as to build a thriving digital economy with data as the key element.

Huang, who is also head of the Publicity Department of the CPC Central Committee, made the remark on Saturday via video link at the opening ceremony of the fifth Digital China Summit, which ended on Sunday in Fuzhou, Fujian province.

Noting that major progress has been made in building digital China since the 18th CPC National Congress, he highlighted the need to make new breakthroughs in core technologies and to open up new prospects in building infrastructure.

Huang said China will make more efforts to accelerate the development of digital government, new smart cities and digital villages, and to improve the digital literacy and skills of the general public.

His remarks come as China's digital economy enters a new stage of development, with its market size having reached 45.5 trillion yuan ($6.74 trillion) last year, the world's second-largest only after the United States, according to a report release by the Cyberspace Administration of China at the two-day summit.

The nation has also built the world's largest 5G network so far, with more than 1.85 million 5G base stations and 455 million 5G mobile subscribers as of June, according to the Ministry of Industry and Information Technology's most recent data.

Wang Zhiqin, vice-president of the China Academy of Information and Communications Technology, a government think tank, said building a sound telecom infrastructure will lay a sound foundation for the high-quality development of China's digital economy.

Hu Houkun, rotating chairman of Huawei Technologies Co, agreed and said that the focus of digital applications is moving from the consumer side to the production side.

"Applications such as autonomous driving, 5G-powered remote control and automatic detection enabled by artificial intelligence have been applied to manufacturing, mining, transportation and other industries," Hu said.

It is clear that the next wave of digital China development is the digitization of thousands of industries, and the convergence of digital technologies and the real economy will become deeper, he added.

Qi Xiangdong, chairman of Chinese cybersecurity company Qi-AnxinTechnology Group, said that as more companies from traditional sectors embrace digital technologies, such as cloud computing, it is of the utmost importance for them to ensure data security.

"In the digital age, more businesses are moving to cloud computing. If a network is interrupted, that will bring severe production risks. Meanwhile, solutions are needed to ensure that data stored on cloud will not get lost or be tampered with," Qi said.

China leads the world in exploring security solutions for the smart car industry, he said. Qi-Anxin, for instance, has a security laboratory tailor-made for internet-connected cars to help auto manufacturers build a better security system.