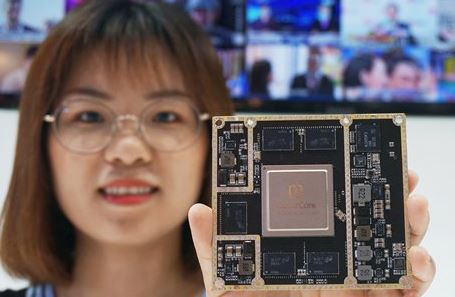 From drones to robots, from artificial intelligence (AI) chips to self-driving trucks, products backed by cutting-edge AI technologies from more than 300 Chinese and foreign companies are exhibited at the 2019 World Artificial Intelligence Conference (WAIC 2019) held in Shanghai from Thursday to Saturday.

The conference is a rendezvous of high-tech debuts such as an intelligent inspection and manipulation robot by Tencent, an autonomous controllable integrated system by 4Paradigm and an AI assistant for astronauts by IBM.

Forums involving academic and business big shots were also held during the event on AI topics.

During the talk, Musk hailed China as "the future" and said he was impressed with the proceedings of the Tesla Gigafactory 3 in Shanghai. Tesla also exhibited a Model 3 at the event.

"Elon Musk's attendance at the WAIC and his talk with Ma Yun reflect the divergence between US companies and US government toward China's commerce and technologies," veteran industry analyst Xiang Ligang told the Global Times.

"It also shows the appeal of the Chinese market to US companies," Xiang said.

The US government has been lashing against China's high-tech sector by blacklisting Chinese tech giants like Huawei and urging US companies to leave China.

In February, Washington rolled out a plan to give AI more priority and resources via an executive order signed by US President Donald Trump.

Tom Mitchell, dean of the school of computer science at Carnegie Mellon University, told the Global Times on Thursday that he found the different AI strategies of China and Western countries not so much about a specific AI policy, but about the culture and work approaches of their governments.

China has more top-down allocation of resources, he noted, which puts the country in "a very good position" compared to the West to lead the world and "show what the country can do with societal scale data."

"I think that China has big advantages when it comes to societal scale data," said Mitchell. He said that 50 years, or at least 10 years from now, other countries would look over to China.

AI down to earth

Experts and company representatives at the WAIC told the Global Times that Chinese AI technologies are already quite independent and advanced by international standards.

A DeepBlue staff member at the fair told the Global Times that China provides an environment for AI companies to "put their products to the markets and test them in real life."

Compared with the situation in many Western countries, high-tech products have easier access to customers in China and evolve at a faster speed, he said. "This will actually help companies and the public in China to reach AI maturity faster," he said.

"This will actually help companies and the public in China to reach AI maturity faster," he said.

Some Chinese products showcased their high technology for a variety of potential commercial applications.

The company was able to put the truck into production in July 2019 and says it has received orders from a company operating in Southeast Asia for seven such trucks.

Some of the past-generation electric trucks developed by the company are also operating in Chinese ports.

A representative from the company surnamed Shen told the Global Times that Westwell's research team developed and updated the technology on its own. China does not lag behind any country in autonomous driving technologies, he noted.

Many Chinese firms have paid for the product and installed the machine in their companies, according to Mao Mao, the company's public relations manager.

It is thanks to China's demand for manufacturing upgrades that the country already has a wide AI application market, according to Xiang, the industry analyst.

"For example, in cities like Shenzhen and Dongguan in South China's Guangdong Province, a large number of plants are using industry robots, making AI a part of manufacturing," Xiang said.

Tencent, for example, promoted the debut of its self-developed intelligent inspection and manipulation robot, "the world's first" at the conference.

Equipped with 5G-enabled real-time remote robot teleoperation technology and AI algorithms, the robot can be used in dangerous industrial environments like chemical plants, a Tencent employee told the Global Times.

"With front-end design and back-end application, I believe China's AI industry chain is complete and that China can make possible independent manufacturing in many aspects," Xiang said.