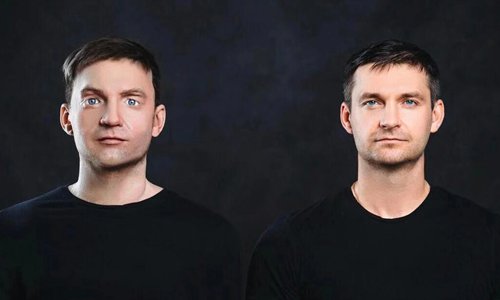 Alexey Yuzhakov, Chairman of the Board of Directors of Promobot and a humanoid robot of his appearance. (Photo: Global Times)

Russian and Chinese startups are developing life-like medical robots tailored to the appearance the users want for the Chinese market.

While some people reached by the Global Times welcome such a product to compensate for manpower, others had concerns over its functions and necessity as well as the eeriness it might bring due to their similarity to human beings, known as the "uncanny valley effect."

The spokesperson of Shenyang-based Zhongrui Funing Holding Group told the Global Times on Thursday that they are planning to supply domestic hospitals, universities and nursing homes with the diagnosis humanoid robot developed with Russian company Promobot.

The spokesperson surnamed Liu said that the robot's appearance can be customized according to photos provided by a customer. They can look like famous surgeons or accompany elderly patients when their children are away.

The robot can mimic human facial expressions and talk to people, Liu said.

Integrated with technologies like facial recognition, infrared sensing and 5G network, the robot would help doctors collect patient information, do physical examinations and accompany them, which helps improve the efficiency of treatment and patient satisfaction, and reduce errors, Liu noted.

The robot has attracted public attention and also raised concerns over privacy and necessity.

"Would it violate a person's right to his identity?" read a typical comment on Sina Weibo.

Liu told the Global Times in response to the concern that they would not make a humanoid robot identical to a living person's portrait without prior approval.

A doctor surnamed Wu, who owns a clinic in Nanchang, East China's Jiangxi Province, said simple conversations and the company of a non-human being cannot compare with the warmth of a doctor or a relative.

Wu also noted the complex situations in a medical environment require a robot to be really intelligent, which she doubts current technology could meet.

A nurse with more than 20 years of experience in Jinzhong, North China's Shanxi Province said the humanoid robot would be costly for low-income groups and not very necessary in remote areas.

But she noted that the robot used for diagnosis and treatment would be popular in bustling cities as human doctors and nurses would get tired and make mistakes. "Such a robot could help doctors avoid unnecessary mistakes, especially during night shift," she said.