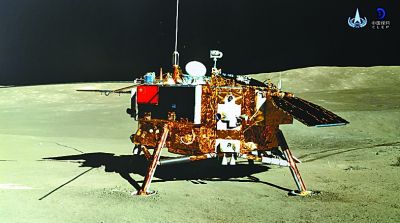 Wu made the statement on the sidelines of the 4th International Conference on Lunar and Deep Space Exploration which kicked off on Monday and is to be concluded on Wednesday in Zhuhai, South China's Guangdong Province.

The Indian spacecraft is designed to perform a soft landing of a rover on the moon, according to Reuters.

The 10-billion rupee ($144.9 million) mission, if successful, will enable India to carry out studies on the presence of water on the south pole of the moon. Only the United States, Russia and China have been on the moon, Reuters said.

President of India Ram Nath Kovind was quoted in a report by the Indian news outlet The Hindu as saying that "Chandrayaan2 will be the first spacecraft to land close to the moon's south pole in some 50 days from now. The mission is expected to lead to new discoveries and enrich our knowledge systems."

International efforts to explore the moon, including made by the Israel and India, as well as the US which is determined to send its astronauts back to the moon within five years, will be pressuring and motivating China's lunar probe missions to further develop, Wu noted.

"The international trend will not play a decisive role in China's planning on its lunar missions, and China is not going to compete with any one over the matter," Wu said. "China will pace itself against plans that have been already laid out in advance with each step surely achieving set goals."

Wu also underscored that China's space projects have always been carried out in an independent and controllable fashion.

Exactly a week ago, India announced a postponement of its second moon mission Chandrayaan-2 due to a technical snag in the launch vehicle system.