TECH China's cloud services market could be open to foreign players, but national security must be protected: experts

China's cloud services market could be open to foreign players, but national security must be protected: experts 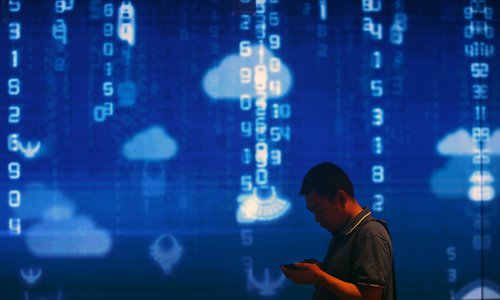 A visitor looks at a display featuring the key elements to harnessing data at the Big Data Research Center in Guiyang, Southwest China's Guizhou Province, in July 2018. (Photo: VCG)

Just as in numerous other sectors, China will eventually open up its rapidly growing domestic market for cloud computing services, which many US technology companies covet to move in. But it will be a gradual process that can ensure market stability and national security, analysts said on Sunday.

US officials have apparently been pushing for greater access to China's cloud services market in recent trade negotiations with Chinese officials, and some media reports suggest that China is considering a compromise.

The Wall Street Journal reported Thursday that Chinese Premier Li Keqiang told foreign business executives that China was considering setting up a "liberalization pilot" in one of the country's free trade zones to open the cloud computing market to foreign companies.

Describing the move as a concession from China in the trade talks, the report has gained attention in the US, where some viewed it as a win from the trade war the US has launched but also voiced skepticism that China would follow through.

In China, industry experts showed no surprise about the reported move, saying that the opening-up of cloud computing and other aspects of the technology sector has always been the goal of the Chinese government under its continuous reform and opening-up plan.

"China continues to open more and more sectors to foreign companies, so opening up cloud computing or even the broader internet sector should be deemed normal," said an industry insider, who asked to be anonymous.

China stated as early as 2015 that it would actively pursue international cooperation in cloud computing. In a policy guideline aimed at promoting the development of cloud computing, the State Council, China's cabinet, said that the government will "guide foreign companies to invest in cloud computing-related sectors in accordance with relevant regulations."

Those regulations, including provisions that require foreign companies to set up partnerships with local companies in providing cloud services, are necessary to ensure stability in the domestic market and China's national security, the experts said.

"Given the sensitivity, it would be impossible for China not to put some regulations in place to protect data safety and its national security," said Liu Dingding, a Beijing-based technology industry analyst.

Citing a telecom regulation in China, Microsoft Azure said in a page on its website that cloud services providers must apply for what's known as a value-added telecom operation permit, and only locally registered entities with less than 50-percent foreign investment qualify for these permits.

Going forward, experts said, China could gradually relax those regulations to allow foreign companies to operate independently within certain areas, such as in the free trade zone in Southwest China's Guizhou Province, where Apple Inc has been storing Chinese users' data.

For example, foreign companies could be allowed to set up data storage facilities within the free trade zone for their Chinese operations. However, it is unlikely that they will be allowed to move the data freely out of the trade zone, at least at the initial stage, according to the experts.

"To allow those crucial data move out without any regulation is unlikely," Liu told the Global Times on Sunday, noting that only after the pilot program achieved success could they be allowed to access markets across the country.

However, the experts argued that even if the regulations allowed foreign companies to operate independently in China, they might find it hard to compete with Chinese companies and may eventually opt to work through a partnership.

"This is not a traditional industry where they hold a great technological advantage over the Chinese companies ... this is a sector where Chinese internet companies have shown great strength," he said.

Chinese companies Alibaba Group, Baidu Inc and Tencent are the dominant forces in the Chinese market, with Alibaba's cloud business holding as much as half of the Chinese sector, which is one of the fastest-growing markets in the world. In 2018, cloud computing services generated revenue of 1.04 trillion yuan, increasing 21.4 percent from 2017, according to official data.

As cloud services have broad implications in technology development and consumers' daily lives, experts argued that opening up the market to market competition will provide better products and services for Chinese consumers.

"As long as we do it safely, (opening up) is a beneficial thing," said one industry insider.