China's 'eye of heaven' to open the eye of the world 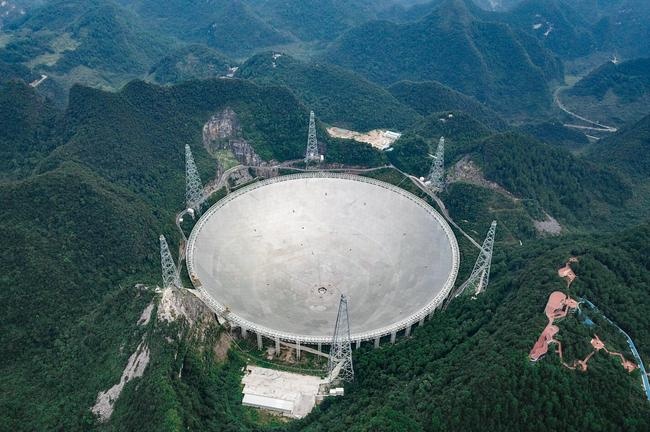 At first glance, Pingtang county of Guizhou province doesn't look different from any other mountainous regions in Southwest China. In late June, clouds fill the horizon with their melancholy folds, flowers bloom on the grassy marshland with cuckoos and cicadas never ceasing to end. Everything looks sleepy in the summer heat.

A few meters away, however, a gigantic silver hemispherical "cauldron" surrounded by rolling hills that nicely conceal this amazing structure suddenly appears.

This cauldron is the Five-hundred-meter Aperture Spherical Radio Telescope, the world's largest filled-aperture and most sensitive radio telescope. FAST has an imaginative Chinese name, Tian Yan, which means the "Eye of Heaven". Just as its name suggests, FAST will not only help mankind to explore the universe for neutral hydrogen, detect pulsars but possibly answer some unknowns in the interplanetary space.

It took five years from the excavation of the site to the final completion in September 2016. But the vision of building a giant telescope in China can be traced back to 1990s. Since then, Chinese astronomical scientists have started the preparation work with an unprecedented path waiting for exploration.