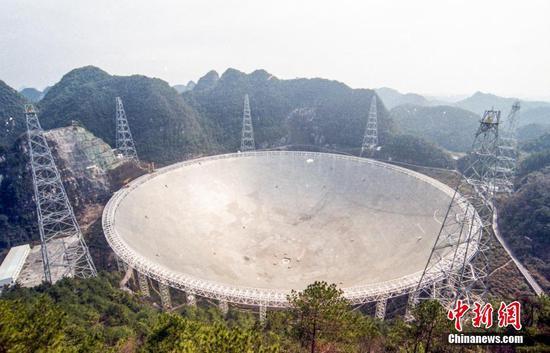 Discoveries of the research, led by Professor Han Jinlin of the National Astronomical Observatories, were published in Research in Astronomy and Astrophysics (RAA) on the same day.

The survey uncovered pulsars with extremely high dispersion measures (DMs), challenging the current widely used models for Galactic electron density distribution, said Han, adding that according to the snapshot observation mode, these pulsars are believed to be located outside the Milky Way.

However, "there are spiral arms in these directions of the galaxy, which have a large number of gas clouds of electrons. It is possible that the number of these clouds or electrons are underestimated. Therefore, the pulsars have challenged the models for Galactic electron density distribution," Han said.

As of March 2021, a sky patch of 126 square degrees of the Galactic Plane has been searched in the GPPS survey, accounting for about 5 percent of the planed sky.

About 40 pulsars found in the GPPS survey have a life-span of less than 30 milliseconds, which are newly discovered millisecond pulsars. "The GPPS survey has already increased the number of known MSPs by nearly 10 percent, a remarkable achievement," said Manchester.

He believed FAST holds promise for the study of pulsar astronomy, especially in pulsars detection.