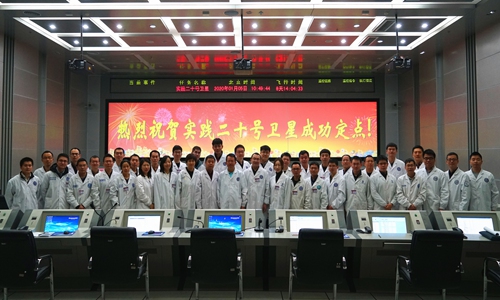 The country's heaviest and most advanced communication satellite smoothly entered its fixed service point in 36,000 kilometer geosynchronous orbit early Sunday morning, marking a successful maiden flight for the spacecraft based on the Dongfanghong-5 satellite platform (DFH-5).

After a nine-day flight and changing orbits seven times, the experimental high-throughput communication Shijian-20 satellite successfully arrived at 105.5 meridian east early Sunday morning, according to a statement by developers the China Academy of Space Technology (CAST) sent to the Global Times on Sunday.

The 8,000 kilogram-plus satellite was launched by Long March-5, the strongest carrier in the Chinese rocket family, in its December comeback mission.

Li Feng, chief designer of Shijian-20, told the Global Times the satellite had accomplished orbit changes and conducted key tests for the DFH-5 satellite platform, marking the successful maiden flight of a satellite for a platform-developed spacecraft.

The satellite will carry out orbital experiments for key technologies, CAST said, including satellite-ground communication tests using Q/V bands, which lie between the extremely high frequency 33-75 GHz range of the radio spectrum.

These frequencies are used mainly for satellite communications.

Such tests are key to the development of the next generation of high throughput satellites capable of delivering 1Tbps bandwidth for ultrafast speeds, according to CAST.

The satellite also has the country's largest solar panel wings, with a full span of more than 40 meters, 10 meters longer than a Boeing 737.

The wings were only partially open when the satellite was first sent into preset orbit by the launch vehicle, as that stage did not require much energy.

After arriving at geosynchronous orbit, the satellite spread its wings for a second time, using more power to provide services including communication, radio and TV signal transfers.

Research and development of the DFH-5 platform started in 2010, the Xinhua News Agency reported.

According to the design, the takeoff weight of a satellite based on the DFH-5 platform can reach eight to nine tons and its payload capacity is 1,500-1,800 kilograms. The power for the whole satellite is more than 28 kilowatts, while the power for its payload is above 18 kilowatts.

"According to these technical indicators, a satellite based on the DFH-5 platform in orbit can provide services equivalent to that of two or three satellites on the DFH-4 platform," Hao said.