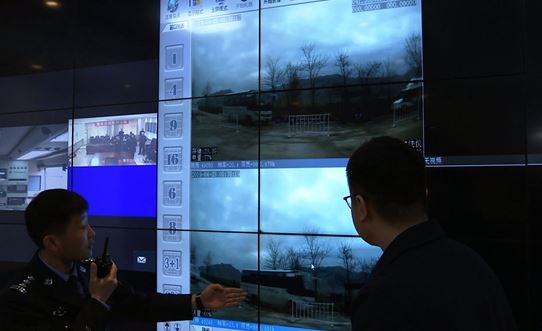 With the help of 5G, real-time footage is being transmitted to the command center in Ji'an, which is about 40 kilometers away. [Photo/CGTN)

We live in a wireless world, where data transfer is about to get even faster. 5G networks promise to usher in a new era of digital transformation powered by technological wonders. In northeast China's Jilin province, a border checkpoint is testing water with a set of 5G technologies.

This is a routine inspection at a 3-way junction by the Sino-DPRK border. The guards at Yunfeng checkpoint are equipped with HD cameras and patrol drones.

With the help of 5G, real-time footage is being transmitted to the command center in Ji'an, which is about 40 kilometers away.

"We place two cameras at the same spot, you can clearly see the difference between the footage at the top via the 4G network and the footage below via the 5G network. The 5G footage is much smoother," said Lin Risong, a senior officer from Tonghua border control unit.

China and the DPRK share a lengthy border of more than 1,400 kilometers, featuring rivers and mountains. The geographical complexity poses challenges in tackling illegal activities.

Zhang Xilu, head of Yunfeng checkpoint, told CGTN: "The 3-way junction here is the only option for vehicles traveling into and out of major areas of the province, and on the other side of the river which is just a few hundreds of meters wide, the DPRK is within reach."

The 5G network is about 20 times faster than 4G technology, making it possible to transmit real-time footage from patrol vehicles, surveillance cameras, and drones. What is more, VR glasses are used to monitor every nook and cranny of the designated areas.

However, one question remains – why was this place chosen as the country's first 5G checkpoint?

"It's because the Yunfeng checkpoint is located at a crucial junction from where smugglers can easily escape to other areas. And also, traditional foot patrol can only cover a distance of five kilometers an hour, whereas patrol drones can get the job done in less than 10 minutes. So the command center always knows what's going on," answered Lin.

The project is part of the 5G ambition of the checkpoint's technical supplier – China Mobile, which already set up the 5G device forerunner initiative nationwide in February 2018.

"After receiving the order, our branch formed a technical team specifically for the construction of the 5G checkpoint. From installation to system debugging, everything was done in just 5 days. Next, we will provide technical assistance for the checkpoint's 4k night vision cameras," said Jiang Yuetao, deputy manager of Tonghua branch at China Mobile.