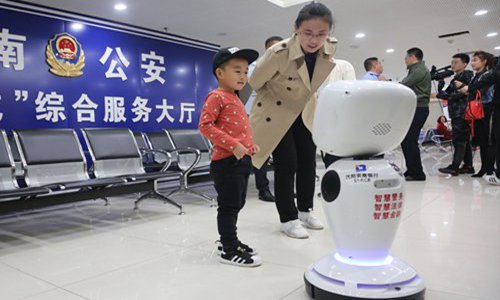 China's first 5G police station, featuring cutting-edge technology such as augmented reality (AR) glasses and patrol drones, has been unveiled in Bao'an district in Shenzhen, South China's Guangdong Province. It's another step in the national deployment of 5G, but analysts said that full 5G development will take time.According to sznews.com, the police station is located in Tangtou village in the western Bao'an district of Shenzhen, widely seen as the next Silicon Valley. The station has only 46 police but covers about 123,000 people. The 5G-related technology is being used to increase police efficiency and ease pressure on the police. Key applications of the technology have enabled real-time ultra-high definition image transmission, facial recognition, police drone patrols and AR smart glasses at the station. China Telecom's Shenzhen branch has set up four 5G base stations in the police coverage region, and another 10 will be established next year, according to the report. A facial recognition system is made possible by the 5G network, which allows facial images captured by AR glasses to be matched instantly with criminal records, according to the report. Cameras are also attached to motorbikes to take pictures of people's faces and license plates on the back of vehicles, which drastically increases the efficiency of information gathering. Drones and patrol robots transmit real-time data, enabling the police head office to see and collaborate with the patrol group at crime scenes. Eight drone routes are in use to facilitate police supervision in the region. The drones transmit real-time footage of police work to the head office through the 5G network. Patrol robots, which have six high-definition cameras, have become a crucial part of the patrol system and make 24-hour police patrols possible. But despite such progress, analysts cautioned that successful full commercialization of the technology won't be achieved overnight.Fu Liang, a Beijing-based independent telecom analyst, said that it will take a long time to realize full 5G application, especially in terms of commercial use, and the market should be wary of hype."The 5G technology deployment is making a lot of progress, but the market is expecting the outcome a little too soon," Fu said. "It took several years for 4G to be fully deployed. For 5G, which can't use the 2G and 3G base stations, it will take even longer."According to thepaper.cn, the investment required for 5G base station development is about 1.5 times that needed for 4G, which means the total investment nationwide will reach 1.2 trillion yuan ($178 billion), with an investment cycle of over eight years. It is estimated that in 2019, China Mobile will build 30,000 to 50,000 5G base stations, with total investment of up to 10 billion yuan. China Telecom will increase 5G base stations in 2019 to a total of 20,000 with a 9 billion yuan budget. China Unicom will invest about 6 billion yuan to 8 billion yuan in 5G network development.