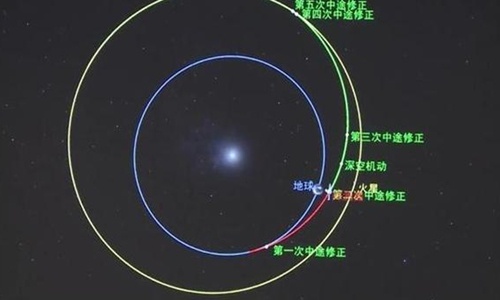 China’s Tianwen-1 Mars probe successfully completed its orbital correction for a second time as of 11:00 pm Sunday Beijing time, after 60 days into its journey to the Red Planet, Global Times learned from the China National Space Administration (CNSA) on Monday morning.

Four 120N engines were simultaneously started and ran for 20 seconds to pull off the second orbital correction, which in return verifies the capability of the engines, CNSA said.

The probe is in good working condition, and ground monitoring and communication stations are getting good tracks of the spacecraft.

Tianwen-1, China’s first Mars probe, made its first orbital correction on August 2, when the probe had traveled for approximately 230 hours, and was some 3 million kilometers away from Earth.

The mid-course correction is undertaken to ensure that the spacecraft sticks precisely to the designated and theoretical flight orbit and to correct track deviation caused by various factors.

According to CNSA, the extent of the second correction is very small, as the launch and first correction work was extremely surgical.

Zhang Rongqiao, chief architect of China’s Tianwen-1 Mars exploration program, told the media on Friday at the 2020 China Space Conference that the entire journey of the Tianwen-1 Mars probe will last approximately 202 days, and the probe will fly 474.4 million kilometers before reaching Mars.