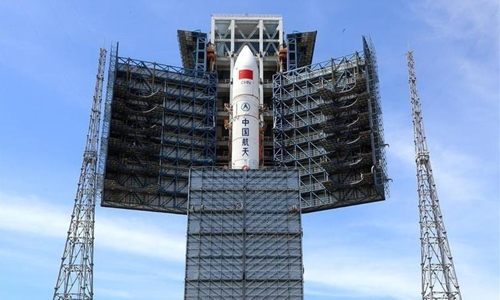 BEIJING (Xinhua) -- The "SIASAIL-I" solar sail, developed by the Shenyang Institute of Automation (SIA) under the Chinese Academy of Sciences, has successfully verified many key technologies in orbit.

The solar sail is a spacecraft powered by the reflected light pressure of the sun on the membrane. It does not consume additional chemical fuel and working medium during navigation, and has the characteristics of small mass, large collection-expansion ratio, low cost, low power consumption and long-range.

The solar sail is considered to be very likely to reach outside the solar system and can be applied to many fields, including asteroid detection, geomagnetic storm monitoring, solar polar exploration and space debris removal.

After the satellite platform enters orbit, the solar sail carries out technical verification through two-stage deployment. At the first stage, the thermal cutting and passive release mechanism are adopted, and the solar sail body is pushed out of the satellite platform and turned over 90 degrees, said Liu Jinguo, deputy director of the SIA Space Automation Technology Research Office.

The second stage is to erect masts and gradually spread the sail which is about 0.6 square meters, Liu said.

According to the data and pictures returned from the satellite, the key technology test of the "SIASAIL-I" solar sail is progressing smoothly, which marks the success of the solar sail verification mission.

In addition, researchers will also carry out the studies on mechanism life, material characteristics and orbital height to verify the de-orbiting capability of the solar sail and explore its potential application in space debris mitigation.