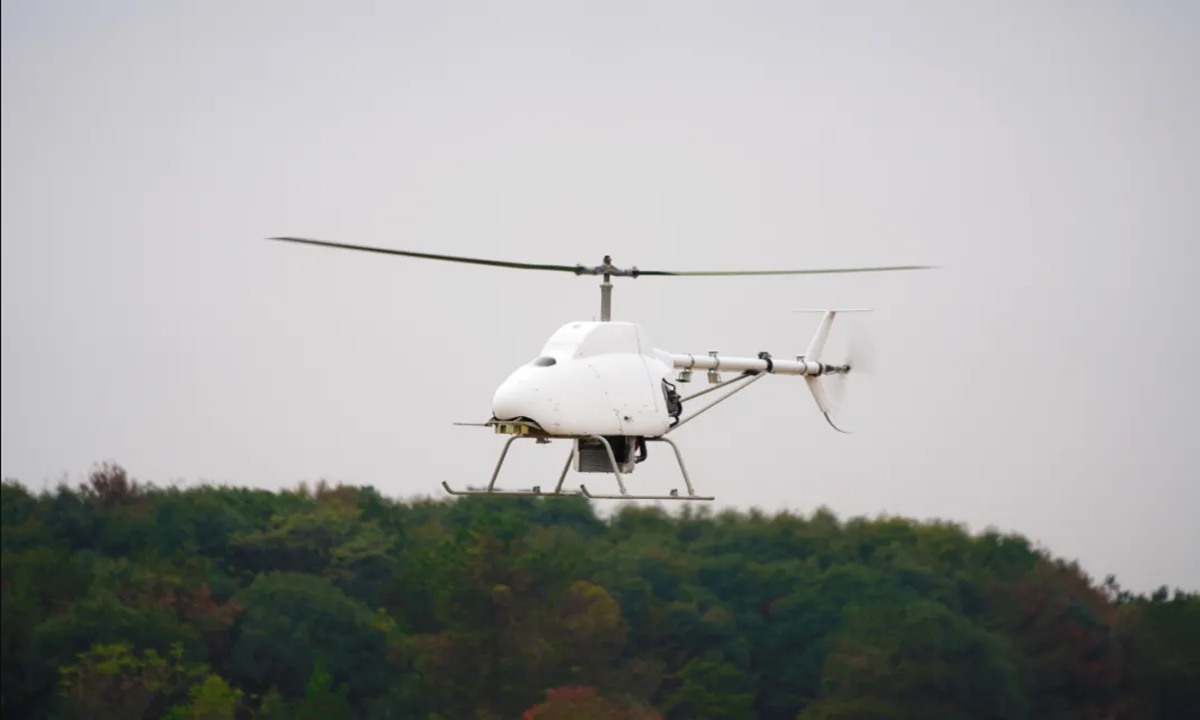 China's first domestically developed vessel-borne lightweight helicopter drone has recently made its maiden flight, its maker announced. It is designed to conduct maritime monitoring and identification tasks, and is expected to be used on board smaller vessels including corvettes and coast guard ships for missions like patrol and search and rescue, analysts predicted.

Developed by state-owned Aviation Industry Corporation of China (AVIC), the AR-500B vessel-borne unmanned helicopter successfully made its maiden flight at a test facility in Poyang county, East China's Jiangxi Province on November 27, according to a statement released by AVIC China Helicopter Research and Development Institute on Wednesday.

During the test flight, which lasted for about half an hour, an AR-500B ran subjects including takeoff, hovering, maneuvering and landing.

The successful development of the AR-500B made up for China's lack of a type of ship-based lightweight helicopter drone, the statement said.

Compared with larger, heavier vessel-borne helicopter drones, a lightweight one can be flexibly deployed on all kinds of maritime platforms including smaller ones like corvettes or even civilian ships, Wei Dongxu, a Beijing-based military expert, told the Global Times on Thursday.

The AR-500B has a maximum takeoff weight of 500 kilograms, a mission payload of 70 kilograms, a maximum endurance of four hours, an operational radius of 100 kilometers and a ceiling of 4,000 meters. It can fly at 140 kilometers an hour and conduct missions like monitoring a vast maritime surface area and identifying targets, according to its developer.

The helicopter drone will serve as far-reaching eyes for warships, and it can possibly also provide communication relay and guidance functions, Wei said, noting that it can also be deployed to guard the coastline.

The drone not only has military applications, but also can be used for civilian purposes, Wei said, noting that it can also be used in maritime search and rescue operations.

In order to make the helicopter drone capable of operating on a ship, the development team designed a landing assistance device, a landing guidance system and an automatic landing control system. The craft has also been tested in environments with high humidity, high temperature, mould, and salt spray.

The AR-500B opted to use a heavy oil engine and adopted special designs in fuel, structure, electronics and avionics systems to deal with challenges including limited hangar space on ships, extreme working conditions, high risks in takeoff and landing and complicated electromagnetic environments, AVIC said.

A model of an unidentified unmanned helicopter, which looks much bigger than the AR-500B, was reportedly spotted on the flight deck of China's Type 075 amphibious assault ship in July. Media speculated that the Type 075 could host this type of helicopter drone.