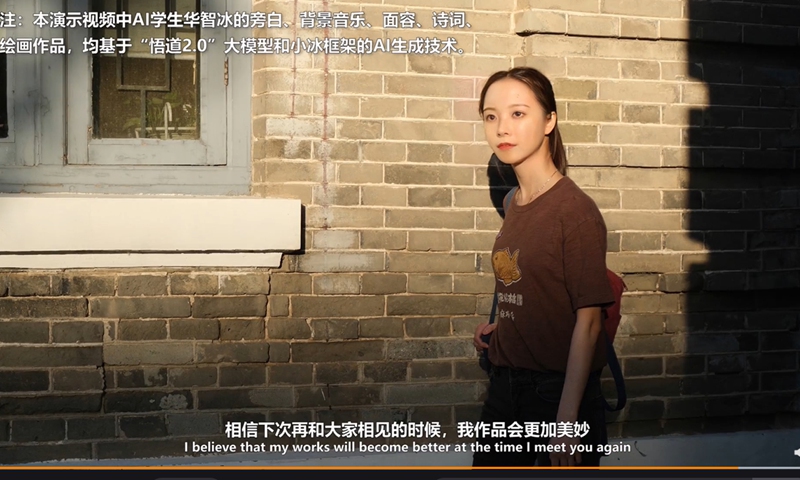 In the first Weibo post, the female virtual student named Hua Zhibing, greeted Chinese netizens and said that she will start studying in the computer laboratory in Tsinghua University.

Hua Zhibing attracted close to 2,000 followers on Weibo in about nine hours.

A video introducing Hua Zhibing was published in her first Weibo post. In it, a young girl wanders around the campus while a female voice introduces herself.

"I've been addicted to literature and art since I was born. The scientists not only gave me my appearance and my voice but also taught me to compose," Hua Zhibing said, noting said the background music in the video was composed by her.

The girl in the video was a real person but the face and voice were virtually synthesized, Tang Jie, a professor at the Department of Computer Science of Tsinghua University, one of the major developers of Hua Zhibing, said during a forum on artificial intelligence held between Tuesday and Thursday in Beijing.

Hua Zhibing officially registered and became a student of Tsinghua University on Tuesday. Developers said at the forum that they have high expectations for Hua Zhibing, hoping she can keep learning, exploring and cultivating the abilities of creativity and communication in the future. She might also be employed after graduating from the university, developers said.

Hua Zhibing was based on the latest version of a China-developed deep learning model, Wudao 2.0, which literally means "understanding of natural laws." It can process 1.75 trillion parameters, breaking the record of 1.6 trillion previously set by Google's Switch Transformer AI language model.

The appearance of Hua Zhibing soon became a hot topic on Weibo.

Some are amazed by how China has advanced in the field of artificial intelligence. Some netizens said they were curious whether scientists would create a humanoid robot named Hua Zhibing, rather than a virtual face and voice.

Some joked that if more robots like Hua Zhibing, which can learn and work, are created in the future, population decline would not be a problem in the world.