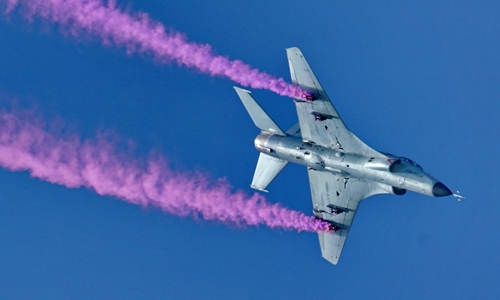 With its first export contract for the delivery of the FTC-2000G multirole combat aircraft to an undisclosed Southeast Asian country, Guizhou Aviation Industry Corp can expect a surge in interested customers, aviation experts predicted on Sunday.

Local media reports reposted Saturday to the WeChat account of the Guizhou Province-based developer affiliated to the state-owned Aviation Industry Corp of China (AVIC) said the deal was signed in late January, about 15 months after the domestically developed plane's first test flight.

The commercial process has been completed and the first batch will be delivered in early 2021, with full delivery expected to finish within two years, the reports said.

The reports did not reveal further key details about the deal, such as the cost or the number of aircraft.

"It took less than two years for the FTC-2000G from its test to signing its first export contract with a certain Southeast Asian country, which is an unprecedented speed in the history of AVIC's made-for-export warplane development," one report quoted Wang Wenfei, chairman of Guizhou Aviation Industry Corp, as saying.

The deal shows the Chinese aircraft convinced the client with its performances, versatility and cost efficiency compared with competitors like South Korea's T-50, said a Chinese military expert who asked for anonymity on Sunday.

It is worth noting that COVID-19 did not hinder the deal, he told the Global Times.

Senior military officers from 16 Asian and African countries have visited the Guizhou company to evaluate the FTC-2000G since its maiden flight on September 28, 2018, and its public debut at Airshow China 2018 in Zhuhai, South China's Guangdong Province on November 6, reports said.

If the first contract goes smoothly and satisfies the buyer, the product's reputation on the international market will be boosted and likely attract more business opportunities, the expert said.

As an independently developed multirole aircraft, the FTC-2000G can serve as an attack aircraft with a large combat radius, strong penetration capability and conduct air-to-ground combat missions like close-in support, air interdiction and in-depth strike.

When deployed as a fighter jet, the FTC-2000G has good mobility, situational awareness and high survivability in dogfights, aerial escort and patrol missions. The aircraft can also function as a transonic trainer with high safety and reliability and conduct medium- to advanced-levels of tactical combat training missions, the aircraft's chief designer Hu Jianxing said in the reports.