BEIJING, July 4 (Xinhua) -- With the mesmerizing images of the recent total solar eclipse in South America still fresh in memory, have you imagined what Earth would look like during the solar eclipse if you were on the moon? 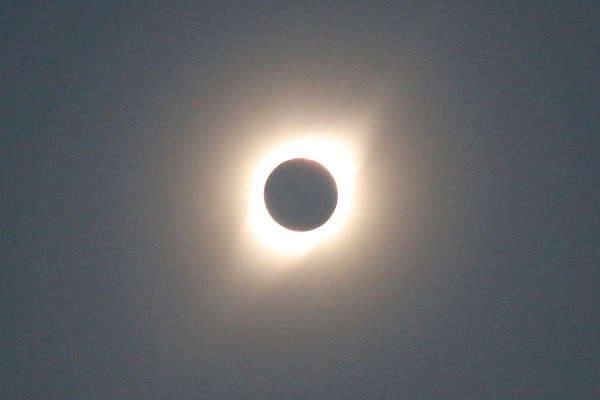 A microsatellite developed by the Harbin Institute of Technology in northeast China's Heilongjiang Province, which is now orbiting the moon, took photos of Earth during the solar eclipse in the early hours of Wednesday (Beijing time).

The microsatellite, weighing 47 kg and named Longjiang-2, was sent into space on May 21, 2018, together with the Chang'e-4 lunar probe's relay satellite "Queqiao," and entered lunar orbit four days later.

The microsatellite carries a mini CMOS camera that only weighs 20 grams, which makes it easy to operate, and it can take pictures at short intervals, according to the research team from the Harbin Institute of Technology.

Since the camera uses an automatic exposure mode, the camera's field of vision must contain a certain area of the moon to realize correct exposure. When the recent total solar eclipse occurred, the orbiter was flying over the far side of the moon. In the few minutes before and after the moon blocked the earth, all the conditions were right to take the pictures, the team explained.

The team cooperated with amateur radio operators in Spain and Germany in taking and receiving the photos. Four pictures taken by the microsatellite during the solar eclipse were sent back to Earth on Wednesday.

The team and the amateurs taking part in the shooting and receiving of the images were enthusiastic about the fascinating pictures. But to their regret, the mission of Longjiang-2 will come to a close at the end of July.

In order to avoid becoming space rubbish, the microsatellite will be controlled to crash into the moon after it stops operation at the end of July, according to the team.