BEIJING, Oct. 19 (Xinhua) -- An analysis of moon rocks brought back to Earth by China's Chang'e-5 mission suggests the samples are a new type of lunar basalt, different from those collected during previous Apollo and Luna missions. 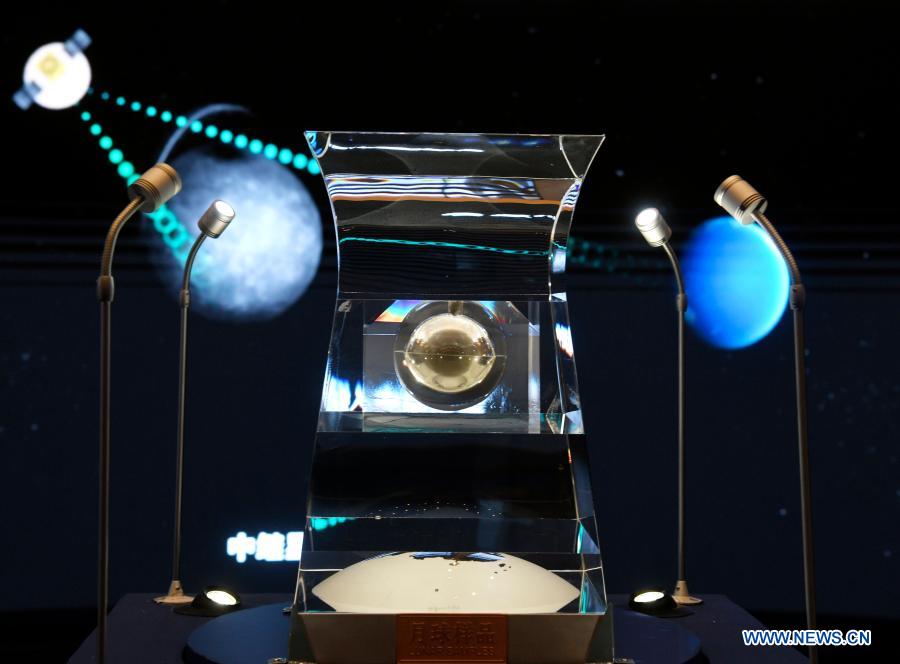 The lunar samples No. 001 brought back by China's Chang'e-5 probe is displayed at the National Museum of China in Beijing, capital of China, Feb. 27, 2021. (Photo: Xinhua/ Jin Liangkuai)

Researchers from the National Astronomical Observatories of the Chinese Academy of Sciences (NAOC) analyzed rock particles 10 to 500 microns (a quarter the thickness of a credit card) in size, and discovered that their characteristics were mainly those of basalt. But unlike the magnesium and iron-rich basalt found on Earth, lunar basalt is low in magnesium and high in iron oxide.

The results were published in the journal Nature on Tuesday.

"This could represent a new class of basalt," said Li Chunlai, the lead author of the article and a researcher at the NAOC, adding that the newly identified basalt is different from samples collected during previous lunar missions, which could lead to a better understanding of lunar volcanic activities.

Lunar samples from the Apollo and Luna missions carried out decades ago by the United States and the former Soviet Union have provided insight into the moon's history and evolution, but their sampling sites are located in a low-latitude region that cannot represent the most widespread lunar surface features, Li noted.

China's Chang'e-5 mission, however, will help rectify the lack of diverse sampling areas as it has -- for the first time in history -- taken lunar soil from the mid-latitude region of the moon, a dark and flat region dubbed the "Ocean of Storms." Scientists believe it is very likely to have preserved evidence of the earliest lunar volcanic activity.

"These samples will open an epoch-making window for the study of lunar science," said Li, who also stressed that the new study would provide basic information for subsequent scientific research.

The Chang'e-5 probe returned to Earth on Dec. 17, 2020, having retrieved a total of 1,731 grams of lunar samples, mainly rocks and soil from the moon's surface. China National Space Administration delivered approximately 17 grams of samples to 13 institutions, which had each applied for research programs.