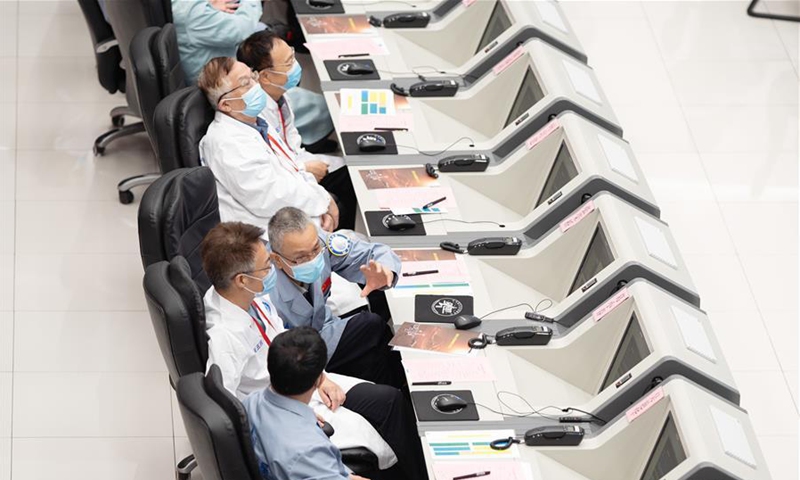 Tianwen-1, China's first Mars probe, completed its first mid-course correction on Sunday, allowing it to continue heading toward the Red Planet precisely, according to the China National Space Administration (CNSA).
The administration said that the maneuver took place at 7 am after its 3000N engine was activated for 20 seconds.
By the time of the mid-course correction, the probe had traveled approximately 230 hours. It was some 3 million kilometers away from Earth, with all systems reported as running normally, the administration said in a statement.
"The first of many mid-course corrections ensures Tianwen-1's short-term stability on its orbit to Mars," commented Wang Yanan, chief editor of Aerospace Knowledge magazine. Several more mid-course corrections and deep-space maneuvers are expected to be made during the probe's 6-month-plus space journey before reaching Mars' orbit, in order to ensure a smooth journey to the Red Planet.
Orbit correction of a Mars rover is similar to that of an automobile, Zhu Qinghua, a deputy chief technician with the probe's orbiter system was quoted in a report by China News Service as saying.
But "the difference is we need to correct not only the flight direction, but also the flight speed and other variables." This is much harder given that there are no road markings to refer to, Zhu said in the report.
"The inner logic of orbit correction of a Mars rover is similar to that of a self-driving car," explained Wang. The difference, however, lies in that spacecrafts have more complex orbits, the adjustment of which requires effort from both the probe itself and the scientists on the ground.
China successfully launched its first Mars probe, Tianwen-1, via a Long March-5 Y4 carrier rocket from Wenchang Space Launch Center in South China's Hainan Province into planned orbit on July 23, marking the opening of the nation's planetary exploration program and heralding a new era in China's deep-space exploration
China's Tianwen-1 Mars probe is expected to reach Mars' gravity field in February 2021, about seven months after the launch. Rover of the probe is scheduled to soft land on a suitable location in the southern part of Mars' Utopia Planitia around May 2021, report said.
If it succeeds, Tianwen-1 will be the first Mars expedition to complete orbiting, landing and roving in a single mission in humanity's history.