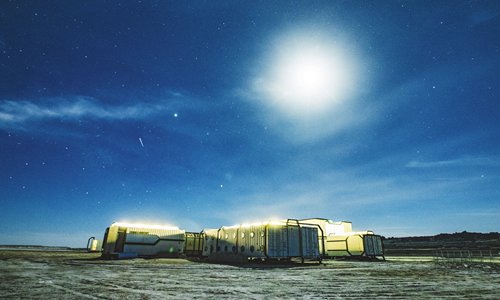 Some say that Lenghu is the most "alien" place on the Earth. Located in the Gobi Desert with a desolate landscape and a starry night sky, it has a name meaning "cold lake."

A township-level region, Lenghu is administered by Mangya city, Haixi Mongol and Tibetan Autonomous Prefecture, in Northwest China's Qinghai Province. No one lives beyond the town's limits. The closest city is Dunhuang in Gansu Province, 230 kilometers away.
Lenghu was a key petroleum town in Qinghai with over 120,000 residents, but when the oil dried up in the 1980s, its population gradually shrank to 800. However, the town's Mars-like landscape is already showing potential for growth.
Emphasizing its newfound identity as a Mars town, Lenghu is becoming a focal point for scientific research, education and sci-fi culture.
In just two years, the town has attracted many institutes, built up a Mars camp and launched a sci-fi literature award. The first set of professional astronomical telescopes will be installed later this year.
"This is the speed of Mars," Tian Cairang, Party chief in Mangya, told the Global Times.
China plans to launch a mission to Mars in 2020. The probe will consist of orbiting, landing, and roving the planet, the Xinhua News Agency reported earlier this month.

Yesterday's glory
In a tiny noodle restaurant in Lenghu, Ren Qin, 60, passionately talked about the town's past.
"In winter it was -20 C, and in the summer the sun burned you directly. Life was very hard here," she said.
Lenghu was one of the four largest oil sites in China. Ren's father came to Lenghu in the 1950s to work in the oil industry. Ren followed in 1970, working in a lab there after her graduation.
In the 1980s, as oil became scarce, many people started to leave. Residents associated with the local oil company moved to Dunhuang in 1993 and, soon after, Lengu's petroleum facilities were abandoned.
Ren's family moved to Central China's Henan Province. She has since come back to Lenghu with her husband to salvage old memories.
The "No.5" base and "old base" are both 10 minutes away from Lenghu town by car. While both communities have become something akin to ruins, one can still catch a vivid glimpse of the Lenghu from a past era in the midst of old movie theaters, banks, and public postings of slogans authored by Mao Zedong.
Lenghu's petroleum heritage and its industrial ruins in what seem like an extra-terrestrial landscape would arouse anyone's imagination, making the scenic town an ideal destination.
"I used to live and work here, and felt it was quite desolate here. But right now, I understand the beauty of my hometown, it being so vast," Ren said.
"I believe Lenghu will attract more visitors."

In 2017, the local government of Lenghu began planning how to take advantage of Lenghu's dark night sky to develop the economy.
"I want to sell the stars," Tian said.
The government made contact with Deng Licai, a senior scientist at the National Astronomical Observatories of the Chinese Academy of Sciences (NAOC), who was on a research mission at an observatory in Delingha, 560 kilometers from Lenghu.
As Deng expected, Lenghu proved to be an astronomy treasure trove.
"The sky brightness is low here. It is clear most nights. Astronomical sight conditions are also great." he said.
"These are the key to astronomical telescopes," Tian said.
After a year of looking for an ideal site, scientists picked the top of Saishiteng Mountain as the location to install astronomical telescopes. Saishiteng is about 4,200 meters above sea level and is an hour's drive from Lenghu.
A very steep mountain with barren soil, Saishiteng proved to be a difficult building area. Just to pick a site and find a path, Tian and the scientists would have to climb the mountain for three to four hours each time.
In the first stage of the construction, everything had to be carried to the mountaintop by a helicopter that made 80 trips a day if the weather permitted.
Two monitoring towers were initially built on Saishiteng Mountain - one tower for studying the sun, and the other for studying the stars at night. Every day, data would automatically be sent to the NAOC.
Through concerted promotional efforts, Lenghu has attracted many scientific institutions and universities, including the NAOC, the Purple Mountain Observatory under the Chinese Academy of Sciences and the University of Science and Technology of China.
Over 30 astronomical telescopes are expected to be installed on Saishiteng Mountain, making it the largest observatory in Asia.
Later this year, 20 telescopes from the "Photoelectricity Fence," a civil-military integration project, will be installed, with other projects from the NAOC soon to follow.
The local government of Lenghu will soon partially own the right to use the telescopes for observation, generating revenue and allowing the town to blossom as a scientific hub with a robust local economy.
In accordance with the idea of "selling stars," Lenghu also plans to establish an internship base for astronomy students and cooperate with astronomy departments at other Chinese universities.
Plans are in the works to set up observatories for astronomy lovers to remotely operate telescopes in Lenghu and observe outer space from their homes.
A concern is that increased development may cause light pollution in Lenghu, hindering its otherwise dark sky conditions. This has prompted the local government to enact regulations protecting its unique atmosphere.

Go camping
On March 1, a Mars Camp officially opened in Lenghu, aiming to attract tourists and inspire children's interest in astronomy.
A picture of the camp has become the iconic online image of Lenghu.  The camp has white containers atop a natural earth platform in Lenghu's depopulated zone, an hour and half drive from the town.
At the Mars Camp, visitors can experience living in space capsules, participate in a "rescue mission on Mars," and try out a "Mars feast" consisting boiled potato, carrots, mutton and fried spam.
The Mars Camp is not only a scenic venue, but also a commercial opportunity. The cost of camping can range from 1,980 yuan to 19,800 yuan ($2,879), depending on how many days visitors stay. Since March, the camp has hosted hundreds of "Martian residents."
The camp can host 56 visitors at one time, but a larger "underground city" is set to be built.
Jiang Feng, co-founder of the camp, told the Global Times that the project's key task is science education, especially for young people.
"The Mars Camp provides STEM courses related to Mars. We put forward questions in a real environment and encourage children to think and solve problems," she said.
"In 2040, humans are landing on Mars," she said. "We want to cultivate talent for it."
Six-year-old Moli from Jinan in East China's Shandong Province was the youngest guest in the camp during the Global Times' visit to the camp. She said that her favorite part about the camp was the capsule and if she moved to Mars, she would like to "be a nurse there."
Literary revolution
The Eboliang Yardang region evokes an alien landscape. There is absolutely no flora and fauna there, but its Mars-like characteristics can be found in its countless hills shaped by wind erosion which appear similar to Mongolian yurts, the Great Wall and even the Great Sphinx.
"People come and say that Lenghu is perfect for shooting movies. But what to film?" Tian said. "So we decided to create our own stories."
The Lenghu Sci-Fi Literature Prize was launched in 2018. A total of 160 stories, some of which were written by prolific sci-fi writers, were submitted for the prize. The writers created hundreds of stories exploring Lenghu's links to space exploration.
Prizes were awarded in the Mars Camp in September 2018, with big names in Chinese sci-fi, such as Liu Cixin, attending. The winning stories were published in a book 12 Lenghu, while a second-place story, The Soul Dancer, was adapted into an extrasensory "film" for the blind that has been shown in cities nationwide.
In 2019, the prize received 420 submissions. The winners will be announced in October in Beijing.