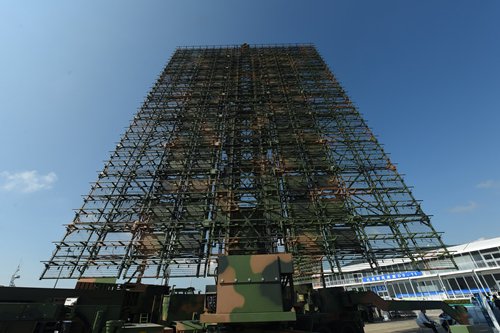 China's meter wave anti-stealth radar not only detects advanced stealth aircraft, but also guides missiles to destroy them, a senior Chinese radar designer said at a recent interview.Meter wave radar can be deployed on vehicles, on land and warships, creating a dense web that gives hostile stealth aircraft nowhere to hide, Chinese military experts told the Global Times on Thursday."As long as they are designed to serve this purpose, meter wave anti-stealth radars can fulfill the requirement," Wu Jianqi, a senior scientist at the state-owned China Electronics Technology Group Corporation (CETC) who conducts researches and designs anti-stealth radar, said when asked in an interview with the Naval & Merchant Ships magazine whether a meter wave radar can guide missiles to shoot down stealth aircraft.Meter wave radars can detect stealth aircraft because modern stealth aircraft are mainly designed to avoid detection by microwave radar, and are less stealthy to meter wave radar, military experts noted.However, analysts previously said that because of their low resolution and accuracy, meter wave radars can only send warnings about incoming threats. And even if microwave radars compensate for the shortcomings of the meter wave radars, they are unable to entirely overcome these shortcomings.Wei Dongxu, a Beijing-based military analyst, told the Global Times that older meter wave radars could only see roughly an object's general direction, not its exact location.Wu solved the issue by designing the world's first practical meter wave sparse array synthetic impulse and aperture radar.Wu said that his radar has multiple transmitting and receiving antennas tens of meters high, scattered in a range of tens to hundreds of meters. They can continuously cover the sky as the radar receives echoes from all directions.Wei said that this significantly enhances the radar's ability to track an aerial target, pinpointing the stealth aircraft's exact coordinates by synthesizing parameters and data gathered by the radar under the support of advanced algorithms.Since the radar can now see stealth aircraft clearly and track them continuously and accurately, it could become capable of guiding long-range anti-aircraft missiles and landing precision strikes on them, Wei said.Although other countries like Russia are also developing meter wave radars, Wu seems confident that China's are the best."As for now, I do not see a meter wave air defense radar from abroad that can match the criteria of the advanced meter wave radar [like the one China has]," Wu said.