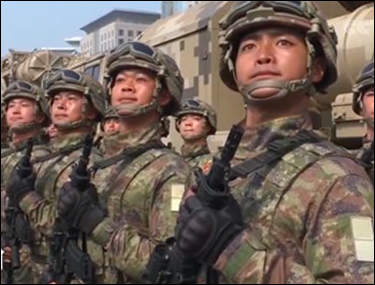 China's new service rifle, first made public at the National Day parade on October 1, is said to be reliable, accurate and comfortable to shoot with and has low recoil. (Photo: Screenshot of CCTV)

China's recently revealed new service rifle is reliable and comfortable, and "super soldiers" are in the making when paired with an advanced individual soldier combat system, said a senior Chinese light arms developer.

The gun, which was first shown to the public at the National Day parade on October 1, was developed by the No. 208 Research Institute of China Ordnance Industries, the developer of the QBZ-95 rifle, national broadcaster China Central Television (CCTV) reported on Monday.

The rifle is highly reliable, feels comfortable to operate, shoots with very high accuracy and has less recoil, Li Xiang, a test marksman at the research institute, told CCTV, noting that the ergonomics of the weapon can better fit the battlefield.

Wei Dongxu, a Beijing-based military analyst, told the Global Times on Thursday that compared to the QBZ-95, China's previous generation of service rifles that features a bull pup design, the new one has an optimized conventional design with better ergonomics.

It will likely use new materials that make it very light, and its advanced optics could help the user measure distance and accurately acquire targets any time of the day, Wei said.

Multiple tests under harsh conditions, including in simulated sandstorms and sand-filled river water, were conducted to make sure the gun can adapt to any situation and remain consistent, CCTV reported.

China's guns have been ranked among the world's most popular guns as China's gun development capability grew, CCTV said.

Wei said China's guns are very competitive on the international market. Older generations of guns still have huge international demand because they are cheaper and perform very well, while new and advanced guns can also compete in high-end markets, he said.

Accompanying the new rifle is an individual soldier combat system, which integrates dozens of advanced devices, including an information exchange interface packed up on the chest of a soldier, the CCTV report said.

"We will provide the Chinese warriors with our advanced equipment, making them super soldiers on the future battlefield," He Long, deputy head of the No. 208 Research Institute, told CCTV.

Wei said the individual soldier combat system can greatly increase the battlefield situational awareness of soldiers by sharing information, so the battlefield would become more transparent to them as they can recognize danger and more accurately attack targets, gaining a significant advantage.