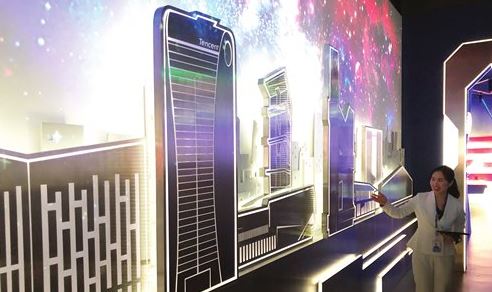 A Tencent presentation to international media in Nansha, Shenzhen headquarters on May 11, 2019. (Photo: Global Times)

Shenzhen, South China's Guangdong Province, has been caught in the crosshairs of the US-China technology Cold War, since most of the Chinese technology companies targeted by the Trump administration are based in the city. However, local industry representatives said they firmly believe that this "new Silicon Valley" will withstand the pressure of Washington while embracing open collaboration. "First, China's ZTE, then Huawei and DJI ... it seems that US President Donald Trump is not merely targeting China amid the escalating trade war but waging a technology Cold War against the Nanshan high-tech area in southern Shenzhen, as those three companies are based there," read a widely circulated post on Chinese social media on Wednesday, which sparked implicit pride about the rise of Shenzhen as a global innovation hub. The US Department of Homeland Security (DHS) said on Monday that Chinese-made drones may be sending sensitive flight data to their manufacturers in China, where it can be accessed by the government, CNN reported.The DHS did not identify any specific manufacturer, but nearly 80 percent of the drones used in the US and Canada come from DJI, the report said.The Shenzhen-based company has grown from a small office in 2006 to a global technology company that does business in many foreign markets including the US, Germany and the Netherlands, thanks to direct access to local resources such as suppliers and raw materials, according to the company itself. DJI has become the new target of US authorities in curbing China's rise in high technology, following an escalating crackdown on Huawei and ZTE. Some analysts forecast that the internet giant Tencent, which is just three kilometers from the headquarters of DJI, will be the next target of Washington. "Motherland, you can count on us. We'll definitely win the [tech cold] war," a source close to the local authorities in Nanshan district told the Global Times on Wednesday. Some Chinese netizens were cheered by this comparison, which helped lift spirits on the internet. "Come on Shenzhen! Fighting!" a netizen said on China's Twitter-like Weibo. China's high-technology sector has become a tangible force that the US can no longer ignore. Being at the frontline of innovation, companies in Shenzhen are likely to encounter difficult times as the Trump administration mulls more restrictions on them.Almost every entrepreneur in Shenzhen keeps a close eye on the ongoing trade conflict between the two largest economies in the world, which has been turned into a technology war, but many of them said they didn't worry that the tension will hinder the growth of China's technology sector."The ecosystem is here," said Laurent Le Pen, a 36-year-old French entrepreneur who has been working at the Shenzhen High-Tech Industrial Park in the city's business district of Nanshan for the past decade.The Greater Bay Area's Internet of Things sector and consumer electronics supply chain are the most optimal in the world, and no one else can compete with that in terms of development speed, he told the Global Times on Wednesday. The Guangdong-Hong Kong-Macao Greater Bay Area with a combined GDP of $1.5 trillion in 2017 is on track to surpass the world's three existing major bay areas - San Francisco, New York and Tokyo - and become the world's most vigorous and largest bay area by economic output, according to analysts. Talent, open spirit Faced with the escalating tariff war and curbs on high technology, the city, with its economy driven by both exports and the technology sector, has been facing a cloudy outlook. Still, analysts forecast that Shenzhen could withstand the pressure as the nation's technology sector continues to embrace global collaboration and competition. Also, the local government's efforts to attract talent have become a major edge for the local industry to stay ahead. "The cluster effect of the high-technology industry in Shenzhen will be more considerable, with the help of government support, in addition to deeper entrepreneurial spirit," Liu Dingding, a veteran industry analyst, told the Global Times on Wednesday. Nanshan district has come up with policies to encourage research and development as well as innovation. The area has 368 platforms, providing firm support for national-level scientific and innovation centers, a situation that has been praised by the State Council, China's cabinet, according to media reports. Among seven Nobel laureate research labs, five are located in Nanshan, where the number of research fellows accounts for 80 percent of the total number citywide, reports said.In spite of the US crackdown, some industry representatives in Nanshan hold an open attitude toward further collaboration, which is also seen as inevitable for the future of technology. "We believe that a focus on our own business and working together with others will help us get through this difficult moment," a source close to Tencent told the Global Times on Wednesday.