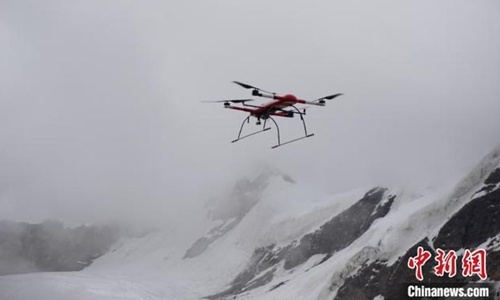 A novel flying robot independently developed by Chinese researchers at the Shenyang Institute of Automation is now able to carry out scientific investigation in a high altitude area - the Qinghai-Tibet Plateau in Southwest China, making it the first ever Chinese robot with such capability.

Named "Yunque" (Skylark), the flying robot can fly and land autonomously, fly along the scheduled path, adjust flight altitude automatically according to the landform, and avoid both dynamic and static obstacles in hostile environment, such as the thin air and strong winds on the Qinghai-Tibet Plateau.

The Qinghai-Tibet Plateau is known for its high altitude, thin air and changeable weather, which have posed great difficulties and dangers to scientific investigators. The robot can help reveal the mechanism of the environmental change of the plateau and promote the ecological and environmental protection.

Breaking through the bottleneck of some key technologies, "Yunque" is capable of loading equipment of five kilograms, withstanding moderate gale as well as flying for nearly 30 minutes at an altitude of 6,000 meters above sea level.

In recent examinations, the robot has finished the thermal infrared image monitoring of ice temperature, three-dimensional topographic surveying and modeling, as well as upper atmosphere temperature and humidity pressure monitoring in a glacier area 6,000 meters above sea level.

Local newspaper Shenyang Daily said the robot can fly to all field stations on the Qinghai-Tibet Plateau and most of the glacier areas on the plateau.

The Shenyang Institute of Automation under the Chinese Academy of Sciences is a cradle of China's robotic technology, focusing on robotics, intelligent manufacturing and opto-electronic information technology.