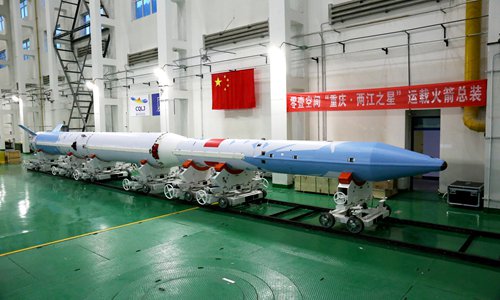 Beijing One Space Technology Group (OneSpace), a Chinese private rocket producer, has completed preparations for its first orbital launch scheduled later this month, the company announced on Tuesday.A successful launch of OneSpace's OS-M rocket would be a significant step in the fast-growing commercial space sector in China, where scores of start-ups are catching up to their foreign counterparts, mostly those based in the US, in a potentially lucrative global market.OneSpace, which is often referred to as China's SpaceX, said it has finished final assembly and system checks and will launch the OS-M launch vehicle at the Jiuquan Satellite Launch Center in Northwest China's Gansu Province at the end of March."The launch of the 'Chongqing Liangjiang Star' will usher in a new era in China's commercial rocket sector," the company said in a press release sent to the Global Times. The rocket was named after the Liangjiang New Area in Southwest China's Chongqing Municipality, where the company has its headquarters. The firm's Beijing  branch focuses on research and development.In May 2018, OneSpace became the first Chinese private company to launch a commercial rocket. However, the company's previous launches of its smaller OS-X series were suborbital missions. The OS-M is capable of delivering payloads into space orbit, according to the company."Reliability and safety are the thresholds of the industry, and they are also notoriously difficult to achieve," Huang Zhicheng, a professor at the Beijing Institute of System Engineering, told the Global Times on Tuesday. "Several [private companies in China] have attempted to launch carrier rockets into orbits, but so far none have succeeded."In October, Land Space Technology Co (Landspace), tried but failed in its attempt to achieve the first orbital launch of the Zhuque-1 solid rocket. Huang said that there is a good chance for OneSpace to pull off its attempt, given the company's successful suborbital launches. But "any experience in transporting payloads into orbits is meaningful, even if it fails," he said, adding that even companies like SpaceX failed several times before making successful launches.Another private company - Beijing Interstellar Glory Space Technology (iSpace) - is rushing to launch orbital missions. ISpace said last week that after series of tests, its Hyperbola-1 rocket is ready for launch, according to news website jiemian.com. ISpace announced in January that it had secured 700 million yuan ($104.33 million) in funding since its establishment in 2017 and plans to carry out its first orbital launch in the first half of 2019, the Beijing News reported.The rise of Chinese private companies will support the development of the country's space technology, Huang said. Private companies "have lower costs and are more flexible in their exploration," Huang said.