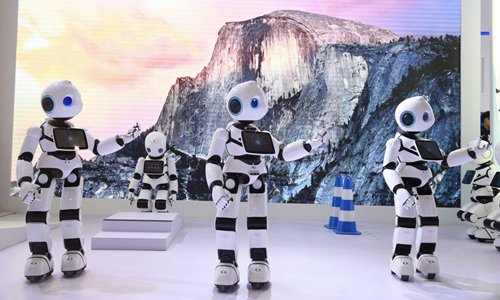 A group of service robots perform a dance at the World Robot Conference 2019 in Beijing on Tuesday. (Photo: Global Times)

China's industrial robot market suffered negative growth for the first time by 3.75 percent in 2018, according to data released at the World Robot Conference 2019 held in Beijing from Tuesday to Friday.

Despite the downturn, experts noted that traditional machines, such as transfer robots and assembly robots, will be upgraded to be applied in more areas of advanced manufacturing, life services, medical treatment and health.

The main reasons for the decline are the depression in the automobile industry and 3C industry (Computer, Communication and Computer Electronic), said Qu Daokui, CEO of SIASUN, during his keynote speech on August 21.

"Because of the tremendous changes in the Chinese market, the global robot market kept a growth rate of around 1 percent last year, nearly zero," Qu said.

Xin Guobin, a deputy minister of the Ministry of Industry and Information Technology, echoed Qu's view and pointed out that the growth of industrial robot output has slowed down since the latter half of 2018.

"There are various reasons. For example, the international trade environment has deteriorated, the pressure of global economic downturn increased and the automobile and electronics industries suffered slumps," said Xin.

However, China's domestic robotic products performed well in 2018, with a 16-percent increase amid the overall decline, according to Qu. In contrast, sales of foreign brands decreased by 10.9 percent.

Experts said the industry has moved to a stage of profound adjustment. As a result, expanding the fields of application and improving the quality and efficiency to boost the healthy development of the robot industry are two urgent tasks, Xin noted.

"China is the largest robot market with growth in the world. But if you look at the robot numbers employed in factories, the penetration of the robot is still relatively low compared with South Korea, Japan and Germany. I think it's because China began automation relatively late due to the competitive labor cost," Adam J. Sobieski, general manager of Danish company Universal Robots, told the Global Times.

He noted that due to young Chinese people being less willing to work in factories, there are a lot of opportunities to increase the penetration of automation work in Chinese factories.

Currently, the areas of applied robotics have expanded from industrial to medical care, social services, education and other sectors.

The slowdown of the robotics industry will not continue because people from different sectors around the world see great opportunities in it, according to Karel Eloot, a senior partner and leader of Asia operations and Internet of Things at McKinsey & Company, a New York-based management consulting firm.

According to the research by McKinsey, the industry is expected to create $1 trillion in value by 2025.

Additionally, robots are playing a significant role in China. The turnover rate of Chinese labor is high, which means new employees need to be trained quickly, Eloot said. But robots do not need re-training, as they can perform a task accurately once instructed, he added.

Rising labor costs and an aging problem in China are also providing great opportunities for the country.

McKinsey and the World Economic Forum have initiated the Lighthouses project, which helps manufacturers implement new technologies. They have selected 26 "Lighthouse factories" in China.

For example, at the Foxconn factory in Longhua, Shenzhen, South China's Guangdong Province, a type of automatic pace car called "Fox Bot" can deliver materials on the production line.

As machine learning has been included in the robot's function, the robot can learn by itself.

A previous operation route can map out a future route, which can be used in warehouses to reduce stock and increase production efficiency.

Such robots have reduced stock by 15 percent and improved production efficiency by 13 percent for Foxconn in the factory, according to Eloot.

Robots in China will not be able to survive in the near future if they don't combine their mechanical qualities with the technologies of artificial intelligence, electronic information, big data network and sensory systems, experts said.

"China's robot industry is experiencing an adjustment and upgrading. It has moved from a pursuit of quantity - such as the number of companies growing from dozens to thousands - to a pursuit of quality, which means boosting the industry from a low-level position to high end development," Qu noted.