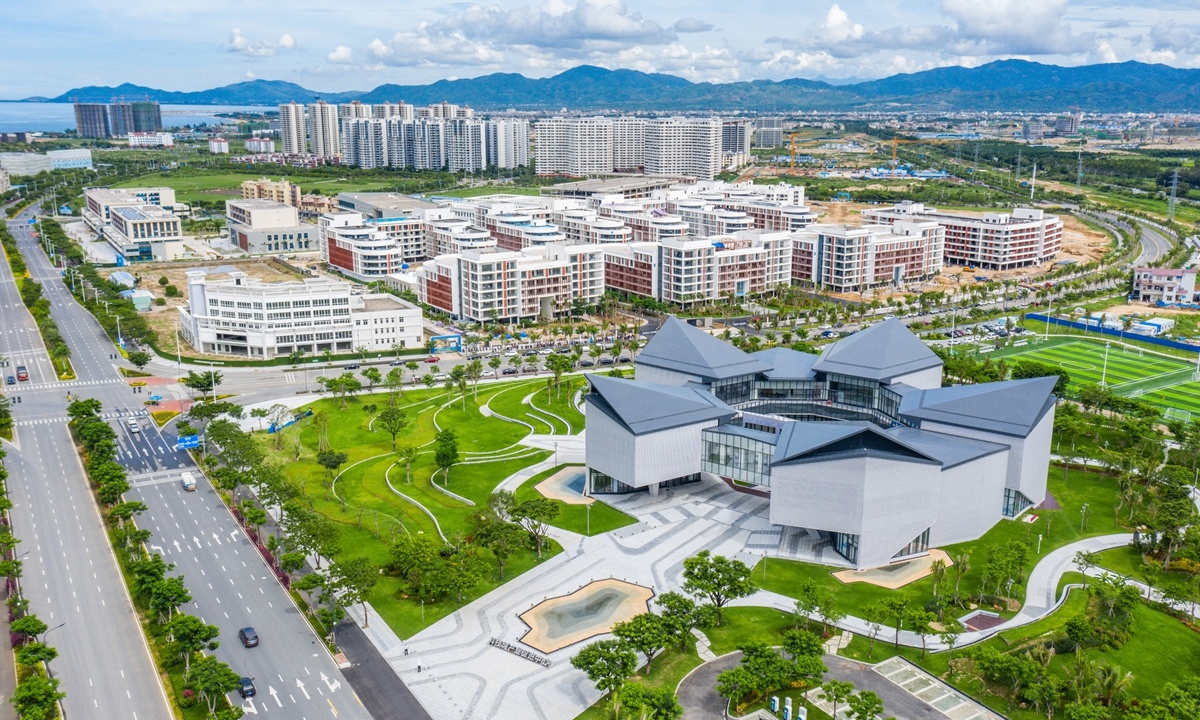 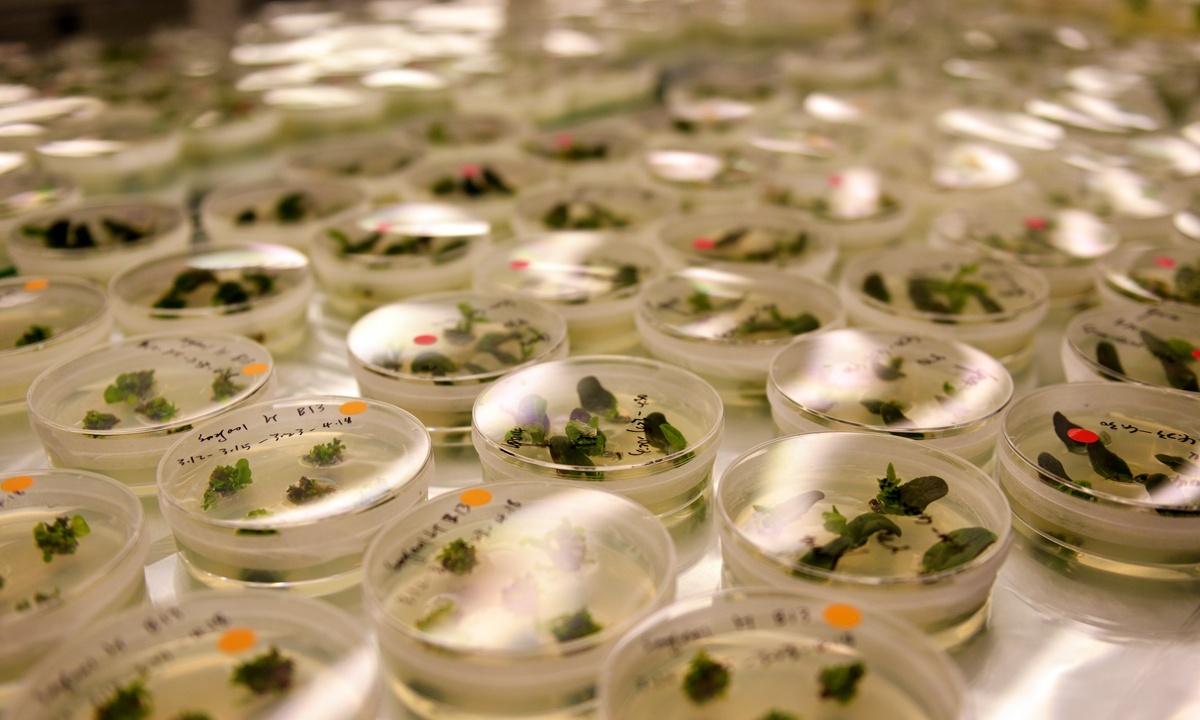 About 30 years ago when Li was still a little boy, he remembered a time when many agricultural researchers across the country came to his hometown in Sanya's Yazhou district, South China's Hainan Province, for plant breeding, because the tropical island province can help shorten the breeding cycle of a variety by one third or a half.

"I cannot forget that a researcher from North China's Inner Mongolia Autonomous Region cried very sadly when the sorghum he planted was mostly eaten by sparrows, and from that moment on, I came to know that my hometown would become a key national breeding base," Li, now a taxi driver, told the Global Times during the trip from Yazhou station to the Nanfan Technology City in the district.

Taking the vision of creating a "Silicon Valley" for the Chinese seed industry, the Nanfan Technology City aims to create a new engine for the innovation and development of the seed industry with science and technology as core.

Nanfan, meaning breeding in the south in Chinese, has become the country's largest southern breeding base since the mid-1970s thanks to local tropical climate and rich biological resources. Every year, from September to May, more than 8,000 agricultural scientists and workers from 700 institutions across the country will congregate at the breeding center.

For Nanfan, its role has upgraded from a traditional breeding center to a platform showcasing strategic scientific and technological strength especially amid international situation over recent few years that pushes China to aim for self-sufficiency of seed resources, to grasp the "biological chip" in its own hands, experts told the Global Times.

Data from the Administrative Bureau of Sanya Yazhou Bay Science and Technology City showed that Nanfan, one of the major projects of the Yazhou Bay Science and Technology City, has attracted around 12 high-level agricultural institutions, a slew of well-known agricultural firms domestically and abroad including German crop breeder KWS, Keygene from the Netherlands, and Syngenta Group China as well as Yuan Long Ping High-Tech Agriculture Co.

For the first time, seed security appeared as an independent chapter in the country's official document on agricultural affairs this year, also called the year's "No. 1 central document."

Seed quality is of great importance to the national security, food security, as well as economic and social security of China, the world's biggest grain market.

He Guohua, chief planner of the Administrative Bureau of Sanya Yazhou Bay Science and Technology City, told the Global Times that many of China's seed resources are reliant on imports, and it was not paid much attention until recent few years when the international trade environment turned to be not that friendly especially amid the US-led trade protectionism under the Trump administration.

"It was a wake-up call for us to realize that apart from semiconductor, the cutthroat seed technology is also not in our hands, and that we badly need to make efforts toward that direction," He said, and that is why the Nanfan "Silicon Valley" shoulders the responsibility of technological innovation.

For Lu Yuping, vice president of Yuan Long Ping High-Tech Agriculture Co and general manager of start-up Longping Biotechnology (Hainan) Co, who came back to China in 2010 after his studying and working in US for over 15 years, the best moment has come to devote himself to the national course to win a turnaround in the seed industry that China has major gap with other countries.

For some species like rice, China has abundant seed resources and strong breeding technology, but for other species including corn and soybeans, the country's investment and output cannot compete with foreign countries especially the US, Lu said, taking the example of soybean.

"Soybean originated in China and we once had abundant seed resources. However, with China's reform and opening up, many soybean seeds were lost to foreign countries, which conducted research and development on soybean for several decades in a low-key way," he noted.

The country bought a record 11.3 million tons of imported corn last year, customs data showed. In the first quarter of 2021, China imported 6.73 million tons of corn, an increase of 437.8 percent year-on-year, while the nation's annual import quota is 7.2 million tons.

"This year would extend last year's import momentum, which is likely to break through 30 million tons," Lu said. "The robust demand for soybean and corn, two important sources of fodder for hogs, has become quite important last year with the breeding rebound in post-ASF (African swine fever) period."

As one of the first batch of biotechnology firms that settled in the Yazhou Bay Science and Technology City, Longping Biotechnology (Hainan) has submitted more than 10 national invention patents, while aiming for planting four generations of corn in a year in Hainan. The start-up mainly focuses on the research of genetical modified corn and soybean.

China's germplasm resources are mainly from native species, which are easily outcompeted by modified breeds that have special traits, according to Lu.

Equipped with sole genetic modification (GM) technology, the yield of corn and soybean could be boosted by 15-30 percent, because of the existence of new genes that have traits that can shield the grain from weed and pest. Currently, China's corn and soybean output was about 40-60 percent that of foreign countries, he added.

To truly embark on a new era of development across the seed industry to safeguard the country's food security, huge investment and fundamental R&D on breeding technology are two indispensable factors.

"Compared with transnational agricultural giants like US' Monsanto which maintained an investment of over 10 billion yuan ($1.56 billion) annually, Chinese peers' investment remains small. For this part, the nation should support financially since businesses lack such huge amount of money," Lu said.

Furthermore, "R&D on breeding technology is the cornerstone without which we cannot achieve self-sufficiency. Over the past decades, the US has taken a leap in the technology and compiled a 'dictionary' of genes, which we cannot obtain," he noted, stressing the efforts that Chinese research institutes and firms should start compiling its own "dictionary".

"We need to prepare mentally for a decade or two to devote ourselves in the course."

Although the commercialization of GM technology has not been greenlighted in China, Lu believed that it will have a bright prospect in the world's largest grains market.

On a small man-made island shaped like a crescent moon off the coast of Yazhou Bay, modern buildings are rising from the ground. Named Moon Island, it is playing the role as a transfer base.

"It is the first line of defense for foreign germplasm resources entering the country in the future. Meanwhile, we are introducing internationally recognized testing organizations for domestic germplasm resources to go global," said chief planner He.

On top of that, the base also undertakes international testing services. For example, when US' seeds are to be exported to Southeast Asian countries, the latter lack a complete inspection and quarantine agency, so they need to entrust a Chinese agency to conduct tests before the export, He noted.

In May 2020, the base realized its first import business of crop seeds for scientific research. Longping Biotechnology introduced 230 kilograms of crop seeds from Brazil after about four months of quarantine and tests.

The Chinese firm imported Brazilian local commercial varieties, and back-bred the biological breeding "chips" developed by itself into the Brazilian varieties, and then exported them to Brazil, where local firm will conduct pest-resistance experiment and apply for approval for commercialization in Brazil.

"Compared with grain, the unit value of seeds is very high, several times or even dozens of times that of ordinary grain, so exports of quality seeds have a lot more value," He said, "meanwhile we import grain from foreign countries to meet domestic demand."