China's space station, Tiangong, will get busier exploring space science and technology in the following years, as the newly launched Shenzhou-15 mission wraps up the last stage of its construction and kicks off the first stage of its application and development. 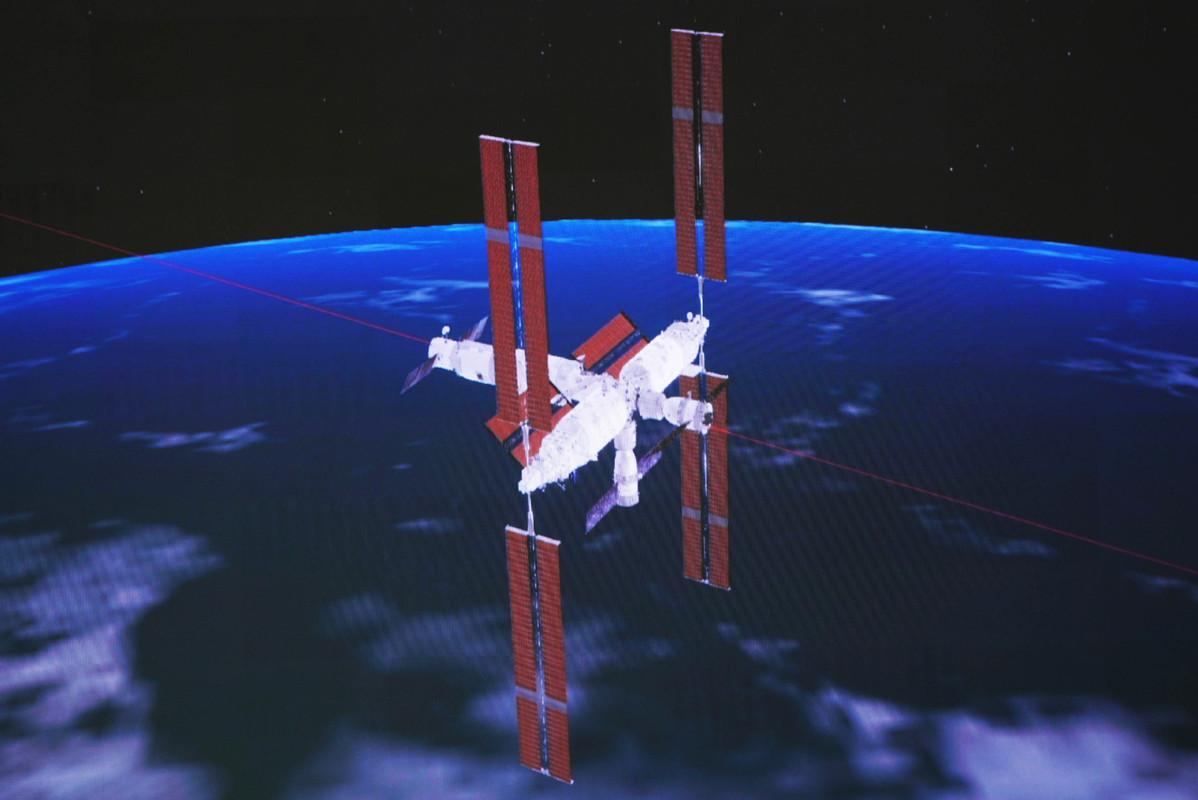 This simulated image captured at the Jiuquan Satellite Launch Center on Nov 30, 2022 shows China's Shenzhou XV manned spaceship having conducted a fast automated rendezvous and docking with the combination of the space station Tiangong. (Photo: Xinhua)

The space station features a basic three-module configuration consisting of the core module, Tianhe, and two lab modules, Wentian and Mengtian. It is designed to be a versatile space lab, capable of accommodating 25 experiment cabinets for scientific exploration.

The construction of the space station benefits from the advantages of the new system of pooling national resources and strength. There are hundreds of thousands of scientific researchers coordinating to make technological breakthroughs and tackle major sci-tech problems.

The researchers have been adhering to self-reliance and independent innovation and developed a large number of core technologies with independent intellectual property rights. The localization rate of key components reached 100 percent.

With the launch of the Shenzhou-15 mission, the space station will enter a phase of application and development lasting more than 10 years.

The in-orbit Shenzhou-15 crew is scheduled to unlock, install and test 15 scientific experiment cabinets, and carry out more than 40 experiments during their six-month mission.

They will conduct extravehicular activities (EVAs) three to four times and complete the installation of the Mengtian lab module extended pump sets and the exposure payload platform, said Ji Qiming, assistant to the China Manned Space Agency (CMSA) director, at a press conference before the launch of the Shenzhou-15 spaceship.

China will welcome astronauts from other countries to enter its space station to conduct experiments, said Ji, adding that several space science application projects jointly selected by China and the United Nations Office for Outer Space Affairs (UNOOSA) or with the European Space Agency (ESA) are being implemented as planned. Related payloads will be launched to get into China's space station for experiments by 2023.

The country strives to build its space station into a platform with extensive international participation and always adheres to the principles of peaceful utilization, equality, mutual benefit, and common development.

Three experiments in Mengtian's two-phase cabinet are collaborations with the European Space Agency, said Liu Qiusheng, one of the cabinet's designers from the Institute of Mechanics under the Chinese Academy of Sciences.

China has signed agreements and carried out cooperation projects with France, Germany, Italy, Russia, Pakistan, and many space agencies or organizations. Tiangong is the first of its kind open to all UN member states.

In a cooperation program with UNOOSA, projects from 17 countries have been included in the first batch of Tiangong's experiments in aerospace medicine, life sciences and biotechnology, microgravity physics and combustion science, astronomy, and other emerging technologies.

With the space station entering the application and development phase, China will continue to adhere to the development concept of openness and sharing, and carry out more and deeper pragmatic cooperation with countries and regions committed to the peaceful utilization of outer space, so that the sci-tech achievements of China's space station will benefit all mankind.

China has been pushing space exploration boundaries on its own over the past three decades. It embarked on a "three-step" strategy to boost its human space program in 1992 when constructing a manned orbiting laboratory was still a flight of fancy for the Chinese people.

The first step was to send astronauts into space and ensure their safe return. The second step was developing advanced space flight techniques and technologies, including extravehicular activity and orbital docking. The third step is to assemble and operate a permanent manned space station.

In April 2021, the country officially kicked off the in-orbit construction of its space station by launching the core module Tianhe.

"In the past 30 years, we have overcome many technical difficulties, such as the technologies of shuttling between space and Earth, extravehicular activity, rendezvous, and docking," said Yang Liwei, the country's first "taikonaut" in orbit since he entered space with Shenzhou-5 in October 2003.

So far, a total of 12 astronauts on four missions, Shenzhou-12, Shenzhou-13, Shenzhou-14, and Shenzhou-15, have participated in the in-orbit construction of the space station.