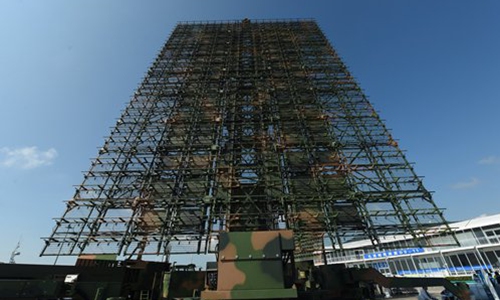 China's top radar development institute was recently awarded a national prize for a classified, advanced project, as experts hailed China's radar industry on Sunday as a top player in the world.

For participating in a major project, the 14th Research Institute of the state-owned China Electronics Technology Group Corporation (CETC) was given the first prize in the National Science and Technology Progress Award in a ceremony held in Beijing on Friday, the People's Daily reported on Saturday.

The detail of the project is "too advanced to be openly displayed," the report said.

The Nanjing-based institute is the birthplace of China's radar industry, the only large, high-technology, comprehensive institute in China that can deliver early warning and detection systems for all fields of sea, land, air and space, the People's Daily report said.

Radar products made by the CETC 14th Research Institute can be found on a variety of Chinese weapons and equipment including warships, warplanes, air defense systems, strategic early warning systems, anti-drone systems and satellites.

The AESA radar dubbed "Star of the Sea" installed on China's recently commissioned aircraft carrier Shandong is a homemade product of the institute. The radar effectively boosts Chinese naval formations' regional air defense capability, making China the third country behind the US and Russia to be able to domestically develop such a system, according to the report.

Thanks to the institute, China now operates radars of different bands and all types, allowing them to cooperate with and complement each other, optimizing their detection capability, detection accuracy and mobility, the report said, noting that coordination between different radar bands can also resist hostile jamming and thrive in complicated electromagnetic environments.

A military expert who asked not to be named told the Global Times on Sunday that Chinese radars can be considered among the most advanced level in the world.

"One of the sharpest spears in modern warfare is stealth aircraft, which can sneak deep into hostile territory and launch deadly attacks. But China possesses the shield to counter it by developing the anti-stealth radar," the expert said.

Wu Jianqi, a senior scientist at CETC, said in an interview with Naval & Merchant Ships magazine in 2019 that China's meter wave anti-stealth radar not only detects advanced stealth aircraft, but also guides missiles to destroy them.

Iran on Saturday admitted it shot down a Ukrainian civilian plane, mistaking it for a cruise missile, media reported, raising discussions among Chinese netizens.

This will very unlikely happen in China, as China's multiple types of advanced radars as well as complete protocols backed by reliable technologies will give air defense operators enough time and data to make judgments, the expert said.