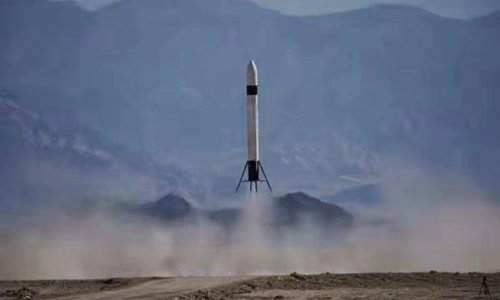 China's first private rocket company LinkSpace successfully launched its independently developed reusable rocket from Northwest China's Qinghai Province on Saturday morning. This is the largest and most advanced reusable rocket in China.
The 8.1-meter-long RLV-T5 rocket flew to a designated height of 300 meters and then safely landed with a landing accuracy of 7 centimeters in 50 seconds, according to a release the company sent to the Global Times on Saturday.
"This is a new milestone in China's reusable rocket research," Wan Mei, vice president of LinkSpace, told to the China News Service.
The release stated that the new rocket can be reused multiple times and has other advantages such as low test cost and a capability of rapid iteration.
The launch also successfully tested several other key technologies for reusable rockets, including new ignition and launching technology, and technology of parallel connection of multiple engines.
The company announced a project of a newer reusable rocket, RLV-T6, on the same day. The forthcoming 14-meter-long rocket can be launched more than 100 times a year, after the technology is fully prepared and perfected, according to the report.
LinkSpace is China's first private company that has the objective of researching and developing aerospace system products.
The company launched its first rocket in October 2018, named ZQ-1 and carrying a small satellite for State broadcaster China Media Group, from the Jiuquan Satellite Launch Center, Northwest China's Gansu Province.
Since 2014 the Chinese government encouraged the participation of private enterprises in the space industry. The country now has more than 60 private companies in the commercial space industry.